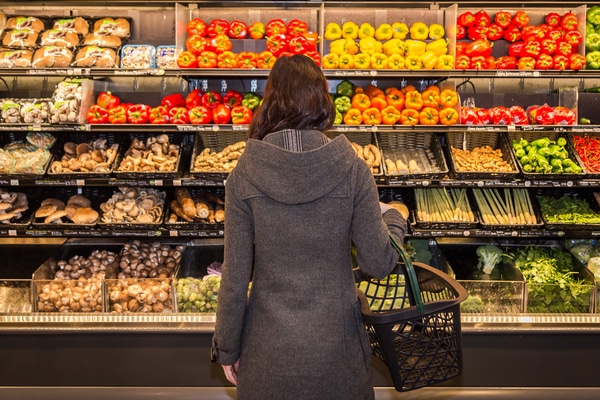 This week Blue Inc, Jones Bootmaker and Brantano were added to the increasing list of fashion retailers flirting with administration, and could well end up among deceased UK high street chains American Apparel and Banana Republic.

That the fashion sector is struggling will not be news to anyone, but what is curious is that amid what is being dubbed a “perfect storm” for retailers, the grocery sector as a whole is performing well.

Earlier this month Kantar Worldpanel revealed that supermarket sales have grown at their fastest rate since 2014.

Combined sales of the leading four UK supermarkets, which account for 70 per cent of grocery sales, grew by 0.5 per cent year-on-year in the 12 months to February 26.

These figures are in sharp contrast to those within the fashion sector, dispelling any umbrella predictions of the current climate in the UK.

How can it be that two of the UK retail industry‘s most prominent sectors are so heavily contrasting in their performance?

“One possible reason for the disparity in performance between food and fashion retailing comes down to the nature of the product,” Manchester Metropolitan University Professor Gary Warnaby said.

“Food is an essential expenditure and fashion is a discretionary purchase; whilst one can postpone the purchase of a new top almost indefinitely subject to the size of one‘s wardrobe, one has to eat.”

When the nation‘s purses feel a little light, it is easy to understand that spending on non-essential items will drop. But it‘s possible that instead of cutting out personal treats altogether, there has simply been a shift from big fashion purchases, to smaller luxury food purchases.

“In a world where we‘re not due for a real pay rises for the next fifteen years, it‘s clear that purchases from high end sectors – including fashion – are becoming harder to justify,” she said.

“Instead, consumers are opting to buy little luxuries, such as an exclusive brand of coffee or a gourmet chocolate bar, which are within everyone‘s reach.

“Helping to put food on the luxury list is the rise of Instagram lifestyle stars. Whether that‘s Joe Wickes, Ella Woodward or the Hemsley Sisters, people now regard their grocery shop as an extension of their lifestyle.

“Your choice of breakfast, organic ingredients or clean eating cook books are as much of a status indicator, than any brand of designer bag or high street jacket.”

It is clear that economic factors are not solely responsible for the shift in spending. Cultural shifts have made food into a fashion statement, and one more affordable than fashion itself.

This is not the only sociological shift that could be having an effect on people’s spending habits.

Keith White from menswear retailer Dobell believes the decline of the big night out since the last recession has been significant in the shift away from fashion spend.

“We‘ve seen the night time economy really struggle since the recession back in 2008, and where there are less people heading out on Friday and Saturday nights, there is less demand for fast-fashion items for that big night out,” he said.

“Retailers, of high street and ecommerce fashion have taken a hit in relation to this, especially with the idea of Brexit, and a possible further recession/economic dip.”

As White mentions, Brexit is going to be a key factor for all sectors in the retail world. Sainsbury‘s Mike Coupe told an audience last week that it could in fact be good for supermarkets.

Ocado also recently stated that rising inflation meant the end to the ongoing price war, and may have actually helped growth in the grocery sector in the last few months.

Warnaby believes inherent factors in both sectors mean that inflationary changes could work differently for both.

“Linked to Brexit, another factor is commodity prices, often traded in dollars, so the devaluation of the pound will have inflationary effects,” he said.

“One could argue that ‘macro’ factors such as the devaluation of the pound affects all retailers equally.

“The question is how retailers deal with this, especially in terms of being able to pass on increased costs to customers and maintain margins?

“However, fashion retailers are perhaps less able to do this, in that customers can always  buy elsewhere, and moreover,  the dangers of the race to the bottom in terms of production costs are well-known.

“Many food items are arguably less price sensitive, and there is more scope for growing commodities in the UK to minimise this effect (which can’t be done with cotton).

“Also growing in the UK, means that the supermarkets can leverage their power over supplier more effectively in order to maintain margins.”