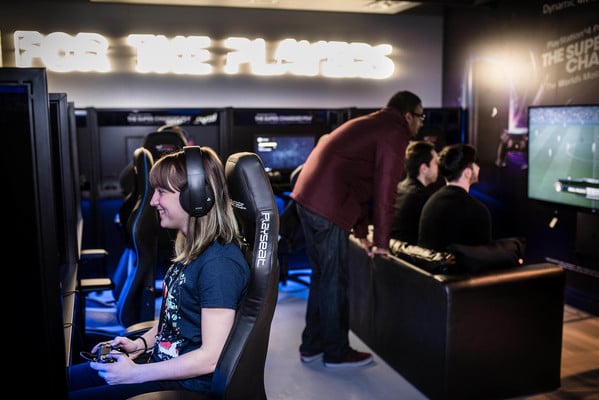 Belong is the name given to Game‘s new gaming arenas which are situated alongside traditional retail stores at seven locations across the UK.

These include arenas in Game‘s flagship store in Soho, London, where the Retail Gazette visited, as well as in Manchester, Portsmouth, Bristol and Milton Keynes.

The concept represents the retailer’s venture away from traditional retail, as reliance on big ticket items like consoles and physical games has proven problematic in recent years.

The dedicated gaming arena plays host to 25 high-end PCs as well as an HTC Vive, PlayStation VR headset and relaxed couch area for those who have just come along for the ride.

Game‘s new leisure venture seeks to capitalise on its core base of reward card holders and the UK‘s growing gaming community, hosting e-sports events and providing opportunities for customers to try out the latest tech and titles.

How does it work?

Anybody can walk in off the street and head down into the Belong basement, where they are faced with a wall of high-end gaming PCs.

There are various sections split between banks of six individual consoles, optimising the area for gaming events.

For Game reward card holders, many of the machines are free to play for an hour a day.

They can choose to play on Xbox Ones or PlayStation 4s, generally showcasing the latest and most popular games players will not yet have had the chance to experience.

Alternatively, users can use the pay-to-play machines, which cost £5 an hour and can be booked in blocks of up to 12 hours.

These are for more competitive players who can access the latest multiplayer titles and compete against friends or players from around the world online.

Users are also able to log into their accounts, meaning their loadouts and items are all accessible to play with.

Virtural reality (VR) experiences are also on offer, where customers can pay for a 10-minute experience on the HTC Vice or Playstation VR.

Alongside this there is “couch play”, which features a 65-inch TV and a two-seater sofa. This also costs £5 per hour and runs games like FIFA for more casual customers to play each other.

Numerous staff are on hand to offer advice and guide users through the VR experience, while a refreshment stand selling sweets, drinks and snacks is also available for those long tournaments.

How well does it work?

The atmosphere in the arena is friendly and welcoming, ensuring that anyone unfamiliar with gaming feels as at home in there as the regulars. This is further encouraged by the range of options available at Belong.

The VR options provide entertainment for those who have never ventured into gaming. Although Game has been criticised for charging £5 per 10 minutes, it begins to make sense when you see the attention given to the user by one of the staff members.

Considering the complexity and cost of the VR systems, it is essential for customers to have a guide in order to experience it fully and safely.

For the less casual customers Belong really comes into its own, encouraging competitive play and making a concerted bet on the rapidly emerging esports sector.

Not only does the friendly atmosphere make Belong a place where communities can flourish, helping teams practice in an environment representative of what they’d experience in competitions, but its high-end systems and well thought out set-up make it ideal for aspiring athletes.

Belong effectively caters to anyone with an interest in video games, whether you’re practicing for the latest Rocket League tournament or simply want to spend some time with the latest titles before committing to a purchase it makes you feel at home.

What’s more it does exactly what Game set out to do as a retailer, offer something no other company can.

While Game’s retail business is struggling to compete with online sales and second hand stores like CEX, Belong provides an experience which you can get nowhere else and will keep gamers coming back time after time.