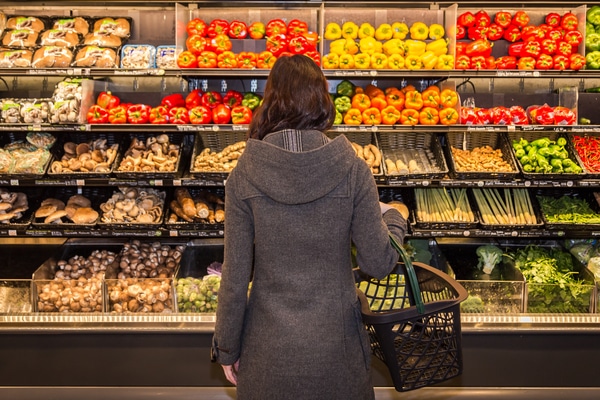 The number of shoppers visiting discount grocers in the last quarter has grown to almost a third compared to the same period last year, new grocery market share figures show.

According to Kantar Worldpanel, during the 12 week period to September 10 almost 63 per cent of shoppers visited an Aldi or Lidl — up from 58.5 per cent last year.

Lidl was once again identified as the fastest-growing grocer in the UK, with a sales increase of 19.2 per cent allowing it to increase its market share to a record high of 5.3 per cent, up 0.7 percentage points compared to the same quarter last year.

Meanwhile, Aldi‘s sales growth of 15.6 per cent took its market share to 6.9 per cent.

Combined, the two German retailers now account for almost £1 in every £8 spent in the nation‘s supermarkets. A decade ago this was only £1 in £25.

Despite the growth of the discounters, Kantar Worldpanel’s figures indicated that 98 per cent of households still shopped in at least one of the traditional Big 4 retailers over the same three-month period.

“Sales have grown continually since April this year and are up by 2.7 per cent in the past 12 weeks, though the retailer‘s market share remains under pressure, squeezed by 0.3 percentage points to 27.8 per cent.

“At Morrisons volume sales have risen for the first time since January and sales of its premium ‘The Best‘ line are up 38 per cent year-on-year, making it the fastest growing premium range in a market where top-tier products are outperforming all other lines.”

Meanwhile, Sainsbury‘s market share fell 0.2 percentage points to 15.7 per cent despite an average sales increase across its convenience, supermarket and online channels of 2.1 per cent.

Due to a strategic move away from temporary promotions, only 35 per cent of consumer spend is now on promoted items at Sainsbury’s, compared to last year’s figure of 41 per cent, which remains the average for the rest of the big four.

Asda has attracted an additional 482,000 shoppers through the tills compared with a year ago – the fastest new shopper acquisition by the retailer in over three years and a welcome relief for what has been the weakest of the Big 4 in recent years.

“Average spend at Asda is £25.74 – the highest of any grocer – which reflects the success of its larger stores and their appeal for families,” McKevitt said.

While sales increased at Iceland for an 18th consecutive period, its market share remained flat at 2.1 per cent.

Waitrose has retained its 5.3 per cent share of the market, on par with Lidl, while Co-op’s market share fell 0.3 percentage points to 6.3 per cent.

Overall, supermarket sales increased by 3.6 per cent in the last quarter, marking the sixth consecutive period in which sales rose by more than three per cent.

Fraser McKevitt said a 1.5 per cent increase in the volume of goods going through the tills has contributed to this growth while the remainder of the overall sales increase is because of higher prices.

“We haven‘t seen sustained market growth of this kind since May 2013,” he said.

Nielsen added that the average increase in sales across all grocery products was 3.5 per cent.

“Own-brand sales are growing across all major food retailers but fastest at the discounters – Aldi and Lidl – and at the Co-operative, Iceland, M&S and Tesco.”

Watkins believes supermarkets are increasingly reluctant to pass on all of the rising cost of groceries to shoppers because the industry remains “very competitive”.

“Looking at what shoppers are putting into their baskets suggests food retailers are helping shoppers manage the impact of inflation by offering different ranges of own-label alongside brands across many categories,” he said.

Nielsen’s data shows that the return of inflation means the market has now been in growth for over 12 months, with the Big 4 grocers all experiencing year-on-year growth in the four weeks ending September 9.

It was also their fourth consecutive twelve-week period of growth.

However, with nearly two-thirds of households now visiting a discounter at least once every three months, Watkins warned that major supermarkets “will need to keep on their toes”.

“Consequently, the three main challenges are: to grow spend per visit faster; to encourage frequency of visit for different shopping missions and; to have inspiring media campaigns that help build loyalty through to the end of the year and the all-important Christmas shop,” he said.

Sainsbury’s to “take on Domino’s” with takeaway pizza trial