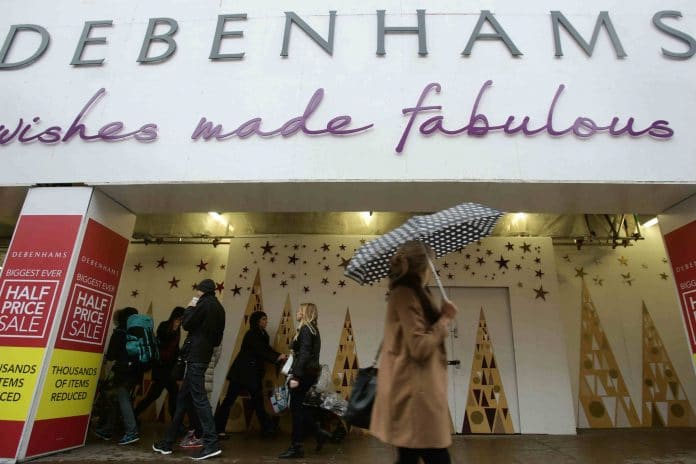 Debenhams has warned that earnings this year would be less than forecast after a disappointing Christmas trading period which saw sales fall flat.

In a trading update covering the 17-week period to December 30 – which was brought forward from next week – the department store said pre-tax profit would probably fall between £55 million and £65 million in the current fiscal year should current volatile, competitive market conditions persist.

In addition, UK like-for-like sales dropped 2.6 per cent in the 17 weeks to December 30, with overall group sales down 1.8 per cent.

In the last six weeks of the trading update period, Debenhams said “tactical promotional action” helped group sales risieby 1.2 per cent on a like-for-like basis, but it still saw worse-than-expected trading in the first week of the post-Christmas sales.

The news saw Debenhams shares plunge 18 per cent to 29.22p this morning in the stock market in London, making it the biggest intraday drop the retailer has experienced since it went public in 2006.

The profit warning comes as the retailer in its last fiscal year ending September 3, 2017, posted a 44 per cent drop in pre-tax profits to £59 million, while underlying profits declined 16.6 per cent to £95.2 million.

Debenhams said it was accelerating its turnaround strategy to produce around another £10 million in cost savings earmarked for this financial year under the direction of chief executive Sergio Bucher.

In April last year, Bucher announced plans to close 11 warehouses and put up to 10 stores under review, plunging at least 220 jobs into uncertainty.

“The market has been challenging and particularly promotional in some of our key seasonal categories and we have responded in order to remain competitive for our customers, which has impacted our profit performance,” Bucher said.

Despite this, he insisted the retailer was seeing “positive early signs” from his turnaround.

“The market dynamics we have seen have reinforced our view that we need to move even faster to implement the cultural and organisational changes needed to ensure Debenhams is in the best possible shape for today’s fast-changing retail environment.”