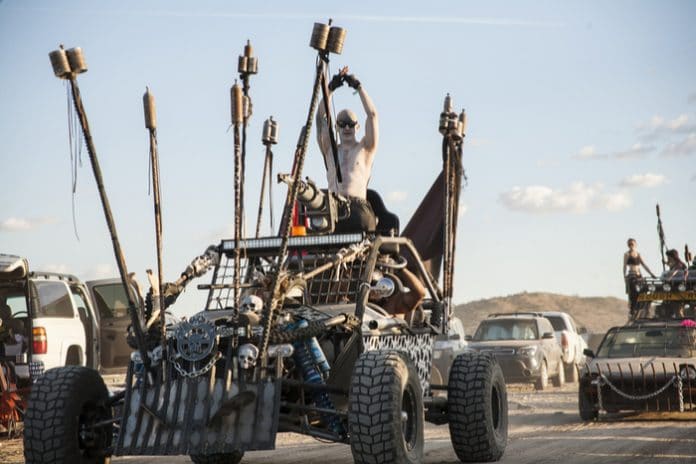 “They fear that Brexit could lead to an Anglo-Saxon race to the bottom, with Britain plunged into a Mad Max-style world borrowed from dystopian fiction. These fears about a race to the bottom are based on nothing, not our history, not our intentions, not our national interest.”

Brexit secretary David Davis sought to reassure the country this week that Brexit will not turn us into a society of murderous, guzzoline-worshipping “war-boys” who spray silver paint into our mouths for a pick-me-up.

After more than 18 months of dealing with the fallout from the referendum, are retailers in a position to start adapting their businesses in order to overcome these challenges, or will our high streets look like Fury Road by the end of 2018?

One of the most widespread symptoms of Brexit across retail in the last year has been the deterioration of the sterling. The knock-on effect of this has driven up import prices, meaning retailers are faced with the choice of absorbing costs or raising their prices.

“With my glass half empty, wherever we end up, I can only foresee prices increasing for consumers given our current dependency on trading with the EU,” Ipsos Retail Performance retail intelligence director Dr Tim Denison told The Retail Gazette.

“Sterling is some 14 per cent below its value pre-referendum, the possibility of tariffs, changes to customs regulations and a shortage of labour all threaten to raise costs further, with a shift in VAT rules potentially also forming part of the mix.”

This has in turn lead to a steep drop in consumer spending power and consumer confidence. In February last year, real earnings turned negative as inflation exceeded wage growth, while unsecured debt now affects one in 10 households.

“The downward pressure on consumer spending has hit the retail sector hard, particularly in the non-food sector, where the BRC and KPMG recorded flat sales for 2017 and our Retail Traffic Index registered a 4.7 per cent decline in store footfall for the year,” Denison said.

Non-food and non-essential retailers have borne the brunt of this dip in confidence, as seen with the swathe of British fashion retailers reporting financial difficulties.

Until significant and solid progress has been made in negotiations, it’s hard to see the pound is going to return to its former glories any time soon.

Brexit is clearly affecting margins and sales volumes but one of the key drivers of the Vote Leave camp – immigration – is also set to have an effect on retail in 2018.

“Brexit could could fuel a cultural and retail renaissance, the like of which has not been seen since the 60s”

“It important for retailers to recognise the impact this will have on recruiting and retaining employees,” he said.

“The People Roadmap report from the British Retail Consortium has estimated that Britain could lose around six per cent of its retail workers unless EU nationals can work freely in the UK after Brexit.

“This will present several challenges for the retailers and the complete supply chain, with a skills shortage requiring new skilled professionals to enter the sector to help manage stores, warehouse deliveries and support the customer experience, which may result in an increase in automation – both in store and throughout the supply chain.”

While 2017 was a fairly tough year for retail, it also saw the emergence and development of potential solutions.

Where revenue streams from consumers are falling, retailers are searching for alternative methods of using their brands and estates to secure other means of income.

“Beyond selling just products, secondary revenue streams include affiliate marketing and advertising as well as loyalty and reward programmes to further engage customers and give profit margins a boost,” Chiswick said.

Another part of this is upping the game in terms of “experiential retail”. Although this is not a trend that has come about since the Brexit vote, it provides a convenient solution to its main problems, helping to provide a separate revenue stream and entice shoppers in store.

Barclaycard Payment Solutions head of strategy George Allardice explained that “shoppers no longer see the high street as just somewhere to make a purchase, instead opting to ‘shop and stay’, spending time – and money – in shops that offer engaging and entertaining experiences”.

He added: “UK retailers who are tapping into shopper demand for events and experiences have seen annual turnover increase by an average of 14 per cent, so it’s clear that retailers can boost sales by responding to this trend.

“We also found that over a third (36 per cent) now host events in-store, such as classes, courses and exclusive sales previews, with 19 per cent planning to start doing so in the next three years.”

Over the next year, retailers are set to extend their focus on alternative revenues, including events and entertainment in their stores. This may help offset the losses taken from dwindling consumer spending power.

However, if data is showing that non-essential spending is on the decline, could this soon also apply to non-essential entertainment activities also? If customers have no money to spend, what does it matter they have more fun and experiential things to spend it on?

Even Mad Max’s apocalyptic world has an undercurrent of hope, with characters (including one named Hope) escaping their captivity to head for the utopian Green Place.

Similarly, not everyone in retail is predicting an imminent breakdown after Brexit. According to Retail Marketing’s category director Stuart Parker, consumer electronics could be in for a boom.

“Looking at the Euromonitor forecast of consumer appliances and electronics sales from 2017 to 2022, retailers and brands can be reassured,” he said.

Dr Denison added that even if the UK fails to secure a deal that gives access to the customs union, Brexit could “could fuel a cultural and retail renaissance, the like of which has not been seen since the 60s”.