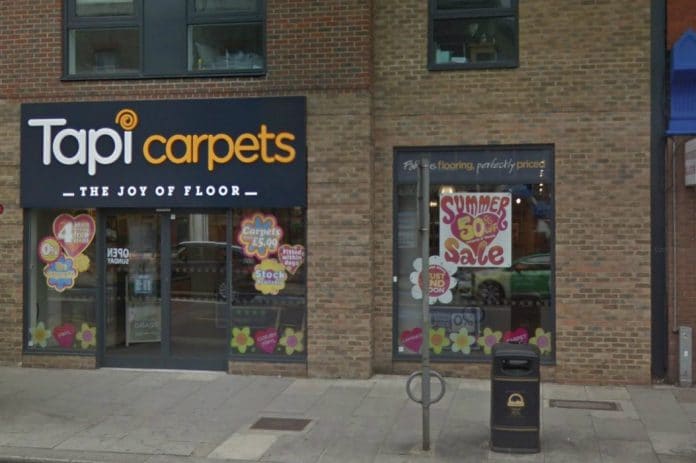 Tapi is seeking to acquire a chunk of Carpetright’s estate as it prepares to shutter stores and reduce rents on others amid its looming company voluntary arrangement (CVA).

According to Carpetright’s founder Lord Harris, who left the retailer in 2014 to join rival flooring retailer Tapi which is run by his son, Tapi is already in talks with some of Carpetright’s landlords.

Harris stated that Tapi’s agents have entered negotiations with landlords of some of Carpetright’s 113 category B stores, which are due to have their rent prices slashed in the upcoming CVA.

They will be hoping to encourage landlords to use a break clause to axe leases with the struggling Carpetright and move into the sites after six months.

It is reportedly also eyeing various sites which are due to shut under Carpetright’s CVA, which was given the approval of both creditors and shareholders late last month.

Though Harris has refused to reveal how many stores Tapi is eyeing, he told Retail Week: “We’re negotiating with some of the landlords on those (stores) and are hoping to get some.”

Carpetright’s CVA now depends on it securing £15 million of interim funding. It will also need to have a successful equity capital raising, due to take place on May 18.

It added that it expects to see underlying pre-tax losses between £7 million and £9 million, attributing the drop to “continued weak consumer confidence, coupled with inevitable disruption to trade arising from the publicity”.

A spokesperson for Carpetright added: “Having received overwhelming approval from both shareholders and creditors for the CVA, we are pressing ahead with our plans for an equity financing.  We believe that a recapitalised Carpetright, as clear market leader with a recognised brand name, will continue to be an attractive prospect for landlords.”