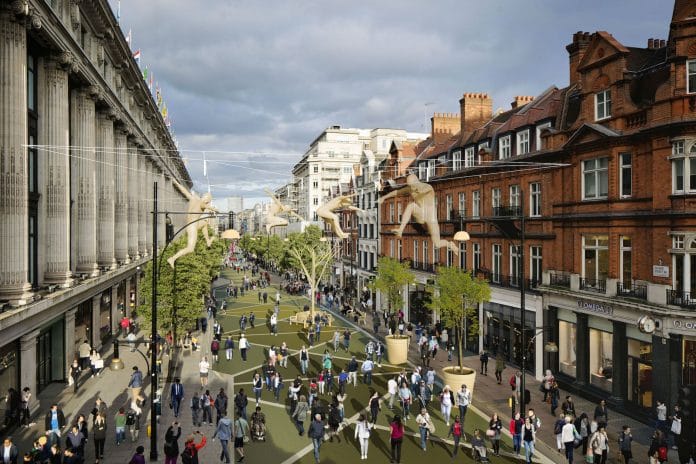 Westminster City Council have revealed its plans for the future of Oxford Street as tensions grow between the council, Transport for London (TfL) and London Mayor Sadiq Khan.

A new £727,000 “area wide strategy” has now been approved by the council’s cabinet, which will reportedly focus on the entire district rather than just the the section between Marble Arch and Tottenham Court Road stations.

After Westminster Council scrapped Khan and TfL’s original plans for full scale-pedestrianisation of the area, of which it had already invested £8 million, it will now have to foot the entire bill itself with the London Mayor refusing to commit £400,000 of TfL investment to the plan.

“Given the extensive work already done, the mayor has made it clear that no more TfL money should be spent on additional strategy work around Oxford Street, and the council has now decided to proceed with a new strategy without TfL funds,” source from the Mayor’s office told City A.M.

Though it’s understood there would be no full-scale pedestrianisation, it’s unclear at this stage exactly what form the strategy would take.

A four-stage plan for implementation will see the council conduct a “comprehensive audit” and further engage with residents, who rejected the original plans over fears traffic would be diverted onto their doorsteps.

It will also include a public consultation and delivery before January 2019, roughly in line with when the Elizabeth Line is due to launch in the area, which is expected to bring an extra 60 million visitors annually.

Westminster Council has stated their new plan would prioritise developing more green space in order to tackle air pollution, and safety issues related to the launch of the Elizabeth Line.

“Our coherent and district-wide solution will be much more than a transport scheme,” council leader Nickie Aiken said.

“It will ensure Oxford Street retains its status as the nation’s high street in a rapidly evolving retail environment and is renowned as a must-visit destination by visitors from London, the UK and overseas.”

In response to the proposals, London Assembly member Caroline Pidgeon said: “For a long time Westminster City Council had a constructive working relationship with TfL. Suddenly they think that they alone can transform Oxford Street.

“However much Westminster City Council might want to spin their proposals, they sadly fall very short of the ambition and huge benefits that full pedestrianisation will bring. Their proposals are merely tinkering at the edges.

“Westminster City Council are sadly misguided in their plans which fail to address that Oxford Street is a road of strategic importance for the whole of London.”