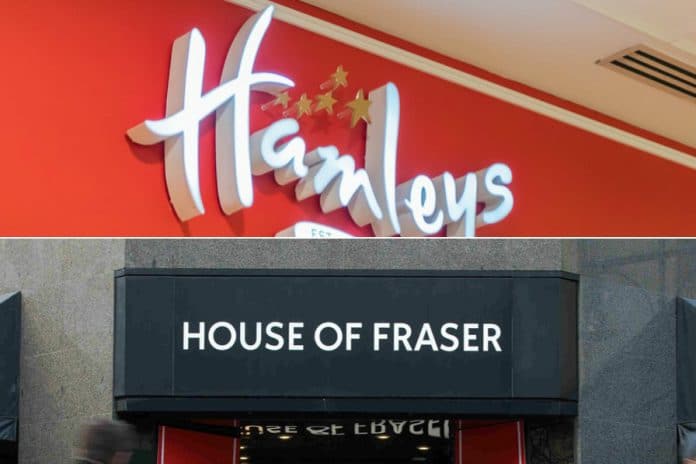 House of Fraser has confirmed reports that Hamleys parent company C.banner has pulled out of its planned investment in the distressed department store retailer.

In April it was revealed that House of Fraser’s majority owner Nanjing Cenbest, part of Chinese conglomerate Sanpower, signed a memorandum of understanding that signified that it entered into talks with C.banner about a transaction of a 51 per cent stake in the department store.

This afternoon C.banner released a statement revealing that it has now pulled out of the deal.

C.banner had also promised a £70 million cash injection for House of Fraser, which was conditional on the approval and implementation of its CVA that was approved by creditors in June.

The much-needed investment has since been delayed due to the legal action filed against House of Fraser by unhappy landlords.

“The recent market prices of the shares as quoted on the stock exchange have significantly dropped to a level which is far below the placing price range of HK$2.40 to HK$3.00 per placing share,” C.banner said in a stock market note.

“The company and the placing agent are of the opinion that the placing has been rendered impracticable and inadvisable, and therefore no longer intend to proceed with the placing.”

Shortly afterwards, House of Fraser released a statement confirming the news that C.banner would no longer continue with the placing, but added that it “is in discussions with alternative investors and is exploring options to obtain the required investment on the same timetable”.

“Discussions are ongoing and a further announcement will be made as and when appropriate,” the retailer added.

This follows news that Sports Direct’s Mike Ashley could be considering a rescue bid for the department store.

Bankers acting for House of Fraser are understood to have held talks with executives representing the controversial billionaire – who already has an 11 per cent stake in the retailer – and asked them to consider providing a £50 million loan.

The money would reportedly go towards its quarterly rent bill of nearly £25 million in late September and making sure there is enough stock for the upcoming Christmas trading period.

House of Fraser was also dealt another blow yesterday when influential credit ratings agency Moody’s judged it to be in technical default on its loans, after downgrading from the “very high risk” rating it received in December.

House of Fraser’s CVA includes plans to close down 31 of its 59 UK and Ireland stores, reduce rent on 10 that will remain open, and slash 6000 jobs.