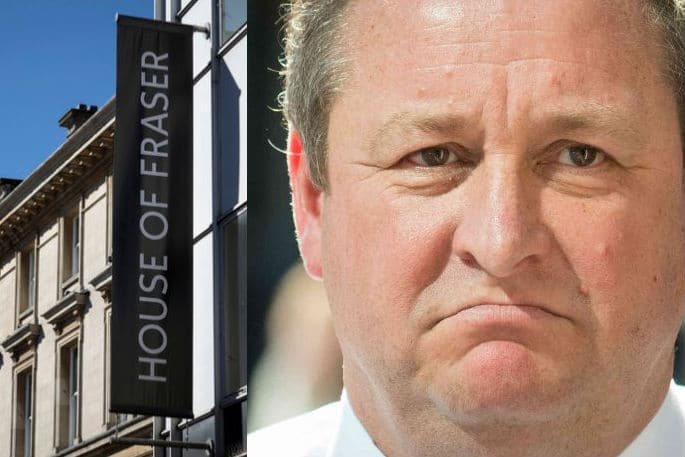 House of Fraser has reportedly held discussions with retail tycoon Mike Ashley about a new investment deal for the struggling department store chain.

According to Sky News, bankers acting for House of Fraser have held talks with executives representing the controversial billionaire – who already has an 11 per cent stake in the department store – and asked them to consider providing a £50 million loan.

The founder and chief executive of Sports Direct bought his 11 per cent stake in 2014, when 89 per cent of House of Fraser was sold to Nanjing Cenbest, part of Chinese conglomerate Sanpower, in a deal worth £480 million.

The news of his potential rescue bid follows revelations that House of Fraser’s promised £70 million investment from Chinese investor C.banner would be delayed due to the legal action filed against it by unhappy landlords.

C.banner’s much-needed cash injection was conditional on the approval and implementation of House of Fraser’s CVA, which includes plans to close down 31 of its 59 UK and Ireland stores, reduce rent on 10 that will remain open, and slash 6000 jobs.

The Chinese firm’s investment also meant it would purchase a 51 per cent stake in the department store chain from current majority owner Nanjing Cenbest.

C.banner has now indicated it would now delay its promised investment until October 31 due to the landlords’ legal challenge of House of Fraser’s controversial CVA, which was approved by creditors last month.

The consortium of landlords taking the department store retailer to court allege that they have been treated unfairly from the CVA and a rescue attempt could be scuppered if their legal challenge was successful.

Ashley had been tipped to make a swoop on House of Fraser after it announced its CVA.

Nonetheless, the tycoon won a legal challenge to obtain House of Fraser’s business plans shortly after the CVA was confirmed, providing him with information in the event of an investment bid.

Meanwhile, earlier this year Sports Direct further increased its stake in House of Fraser rival Debenhams, raising its interest in the department store chain from 23 per cent to 29.7 per cent.

This means Mike Ashley’s retail company is now just 0.3 percentage points away from the minimum stake in requires to launch a takeover bid of Debenhams.

Ashley also has a has a strategic investment in French Connection.