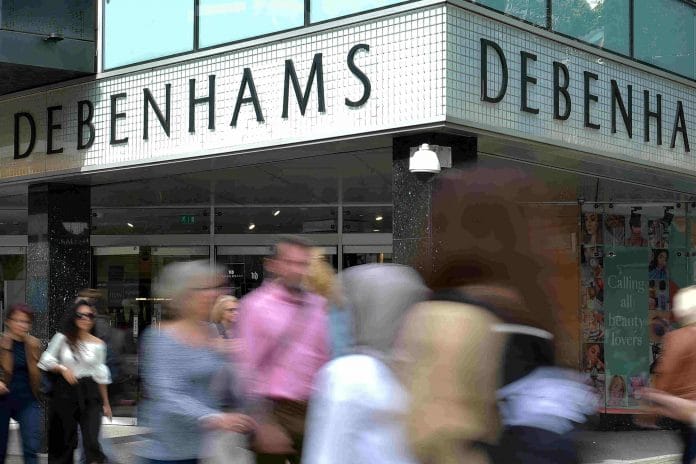 Debenhams shares plunged 17 per cent yesterday in the wake of news that KPMG was called in to help draft emergency plans to save the embattled retailer.

Reports indicate that the department store was considering a list of options, including a CVA, an insolvency procedure used by struggling retailers to shut under-performing shops, cull staff numbers, and restructure the business in order to save it from complete collapse.

According to The Sunday Telegraph, Debenhams reportedly called in KPMG to help draw up the turnaround plans.

If Debenhams goes ahead with a CVA, it would join a raft of retailers including New Look, Carpetright and Mothercare, who have opted for one despite anger from landlords who have argued it leaves them out of pocket.

The news prompted shares in Debenhams to drop by than 17 per cent yesterday.

The retailer’s chairman has also lashed out at speculation over its future, insisting that the chain is not insolvent.

Sir Ian Cheshire said that it is “simply not true” that Debenhams is actively embarking on a CVA and described speculation about the department store chain as a “circus”.

“The only analogy I can have to it is like having a bunch of nosy neighbours watching your house. Somebody sees somebody in a suit going into a room,” he told BBC Radio 4’s Today programme.

However, Cheshire admitted the struggling retailer was considering all options with KPMG.

Debenhams yesterday said it expected full-year pre-tax profits of around £33 million before exceptional items, which is within the current market range of £31 million to £36.5 million.

Underlying earnings are forecast to come in at £157 million, with net debt of approximately £320 million.

Debenhams also assured that it has continued to strengthen its financial position to ensure flexibility amid “volatile market trading conditions”.

“Nevertheless the product and format improvements we have tested are gaining traction and we are ready to scale up some of our strategic activity ahead of peak.

“Having put in place a leaner operational structure and strong leadership team, and taken action to strengthen our financial position, we are well equipped to navigate these market conditions and take advantage of any trading opportunities that emerge.”

Cheshire also reiterated yesterday that the board was continuing to work with advisers “on longer term options, which include strengthening our balance sheet and reviewing non-core assets”.

Debenhams last month said it would swing the axe on up to 90 staff at its fashion and home departments as part of a major cost-cutting drive.

In January it announced plans to ramp up efficiency savings, with another £10 million earmarked for this financial year and £20 million extra annually.

Bucher, who is leading the turnaround, then went on to slash 320 store management roles in February.

In June, Debenhams issued its third profit warning this year as trading came in “below plan”.

Debenhams is also the subject of takeover rumours, with speculation building that controversial Sports Direct founder and chief executive Mike Ashley is set to merge it with his newly acquired House of Fraser.

Ashley owns just under 30 per centre of Debenhams, close to the threshold at which he must launch an official takeover bid.