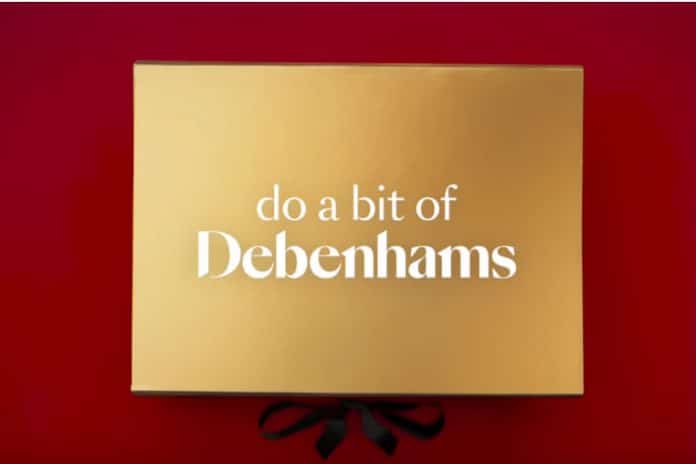 Debenhams has become the first of the major department store to launch a TV campaign that champions the success of thoughtful gift givers.

Accompanied by the strapline “do a bit of you know you did good”, the campaign is the evolution of the “do a bit of Debenhams” platform which launched in September that celebrates the joy of shopping.

Debenhams will run its new campaign across all media formats, including TV, digital, social media and print.

The TV ads comprise of four 20-second clips that depict a gift giver experiencing the moment of joy knowing that they’ve found the perfect gift, alongside the injection of a signature soundtrack Star by Kiki Dee and voiceover by Jenna Coleman, the star of Victoria, Dr Who and The Cry.

Teasers for the ad will launch online on social media today ahead of a TV debut on Friday night this week on Channel 4.

The ads aim to convey Debenhams’ position as a gifting destination where shoppers can easily discover and curate thoughtful gifts for their loved ones – across the department store’s fashion, beauty and home areas.

Each clip ends when the gift giver recognises they have made a sound choice of Christmas present, based on the cues around them, and relishes the moment of accomplishment.

“Shoppers told us that the real joy of shopping comes from discovering the gift that you know the recipient is going to really love. We wanted to celebrate that moment,” Debenhams marketing director Richard Cristofoli said.

“Department stores occupy a unique position in that they enable consumers to shop a variety of gifts under one roof – making it easy to find the perfect gift collection.

“With shoppers having to buy as many as 20 gifts for family and friends, we wanted to share a fist pump with the gifter rather than the giftee and celebrating those shoppers with the confidence of ‘do a bit of you know you did good’.”

In addition to the ads, in-store Christmas markets will also provide Debenhams shoppers with a festive shopping experience where they can curate their choice of gifts for a loved one.

Independent local food and drink pop-ups will also launch in stores across the country including gin bars and fresh ice-cream parlours.

The Christmas campaign launch comes amid a turbulent year for the UK’s mid-market department stores as whole, in particular Debenhams which recently unveiled the the worst financial results in its 240-year history and plans to close 50 stores in the next few years.

Fortnum & Mason and Fenwick are two other department stores to have launched Christmas campaigns, although neither feature TV ads.

Other major retailers that have so far launched their Christmas campaigns include Lego, Currys PC World, Very.com, Argos, Asda, Lidl, Barbour and Aldi.