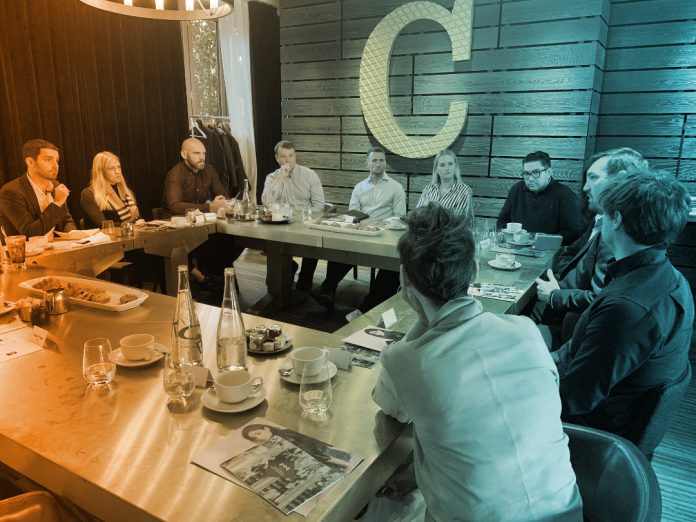 In terms of mobile app usage, retailers are not just competing with other retailers — they are also battling with social media networks, news and entertainment channels, and companies offering services across multiple verticals. But apps must still be viewed as a core part of successful modern retail.

That was a key message when organisations from across the UK retail ecosystem met in London on October 25, at a breakfast roundtable event hosted by Retail Gazette and app commerce specialists Poq. In that sense, the likes of Netflix, Uber and Instagram are companies retailers might want to look at for inspiration in the mobile app space.

Representatives from Halfords, Hive, LK Bennett, Matchesfashion.com, Molton Brown, Pro Direct, and Upbeat Drinks were at the event, and all clearly understood the importance of getting mobile commerce strategy right. The general consensus was that offering an app provides an all-important convenience factor for customers, but the challenge lies in what one’s app stands for beyond that.

Companies such as Starbucks, which has wrapped its loyalty scheme and pre-order and pay proposition into a mobile app to create a core reason for people to use it, and John Lewis, which embeds a product wish-list and in-store product scanner within its app, are examples of retailers that have found their app commerce raison d’etre.

Asos, which recently rolled out its Boards feature that allows users to organise their wish-list or potential purchases items in an Instagram-esque fashion, is another example of a retailer consistently providing added value through app commerce.

But these are examples of companies with significant internal budgets and resources for mobile development. There are, as an alternative, software-as-a-service partners that can build profitable and customer-enticing apps that stand out.

Holland & Barrett, Made.com, and Missguided have all followed this route in partnership with Poq, for example, and each have their own distinctive features, including the latter’s Tinder-style “swipe right or left” feature to indicate products they like or don’t like.

Michael Langguth, co-founder and chief operating officer of Poq, noted: “Retailers questioning whether they should launch an app because of competition for screen time from Facebook, Instagram et al are arguably approaching mobile strategy from the wrong angle.

“There is significant revenue to be generated through app commerce, and our research shows customers are increasingly likely to buy from a retailer or brand via their app as opposed to a mobile site. Providing a platform on which customers can transact easily using their mobile phone is a necessity in today’s market.”

Barriers to progress in the app commerce journey cited by the roundtablers included lack of access to tech talent in their local vicinities, as well as what could be described as traditional ways of thinking in terms return on investment (ROI). There seems to be a growing consensus within retail that tech capex must be considered for its long-term ROI potential and how it builds “lifetime customer value”, rather than the immediate impact it has on balance sheets – but that is not always what happens currently.

Encouragingly, there is an appetite for change, and many around the table agreed the industry would be better for it if chief executives and finance directors adopted this mentality.

Graham Broomfield, who has recently become digital director at fashion retailer LK Bennett, and who attended the event, said: “We were early to launch a mobile app many years ago now, but no longer have one in operation. It’s something we’re considering investing in again as part of a wider focus on digital strategy, however it has to be right for our customer and has to function in a way that joins up our all our channels.”

He added: “LK Bennett has recently made some changes at senior level which put us in a great position to drive forward with a digital strategy that can benefit our brand — and, importantly, our customers — in multiple ways.

“Having buy-in from the very top, and having the c-suite in agreement that digital should be a significant area of focus in the immediate term, is absolutely crucial in delivering success in this space. At LK Bennett, there’s an understanding that it’s now very much time to invest in digital, and we’re moving ahead with that accordingly.”

Attendees concluded there is no one-size-fits-all approach to app commerce; how an app looks clearly depends on type of retailer, and what sort of customer they want to attract. But there was a common desire to “keep things simple” and then evolve the proposition.

For some retailers – and the revered Starbucks can be included in this list – the launch of a mobile app was all about building a picture of what their customers look like. It is a well used method to start generating data and understanding consumer behaviours, particularly for businesses with a heavy reliance on store interactions.

Langguth commented: “Yes, retailers need their mobile apps to stand out, be it through unique features, links to additional services, or compelling content, but simply having a platform in the first place is an important first step.

“Offering a mobile app provides the convenience so many customers are seeking, and then it’s up to individual companies to choose how they want this platform to represent their brand. In the API environment we’re now in, these can be added incrementally as and when required, and then used as ammunition in the battle for securing screen time against rival retailers, brands and other so-called digital competition.”