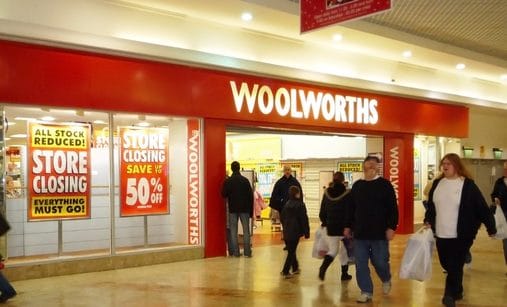 Pop, and bang, goes the market. Or, more to the point, Woolworths. These are words used by those in the know when talking about the catastrophic demise of the 100-year-old retailer a decade ago.

The loss of 807 stores and 27,000 jobs between December 27, 2008 and January 6, 2009 was “the first domino of physical retail armageddon,” recalled Matthew Hopkinson, co-founder of retail advisory company Didobi and a former Local Data Company director.

“We’d never seen anything like that before where suddenly every town in a [just over a week], 800 Woolworths stores – bang – they went.

“It was a wake-up call for the consumer that every little nook and cranny towns up and down the country has been impacted.

“It wasn’t just a London thing, it wasn’t just a few shoddy brands – it was their town, their store in their shopping centres and high streets, and it was gone.”

In the decade since, that armageddon is continuing with the UK still losing retailers.

According to the Centre for Retail Research, since the worldwide economic recession in 2008, 32 major retailers have gone to the wall – taking down 12,770 stores and leaving 175,714 employees without jobs.

According to analysis by PricewaterHouseCoopers and the Local Data Company looking at 500 high streets, 2692 shops closed between January and June this year, while 1569 opened for business.

“Could – or should – retailers present since 2009 have learned from the ghost of Woolworths, arguably still the biggest high street casualty the UK has seen?”

Suggested reasons for Woolworths’ failure range from poor management, poor customer offering, a rapidly evolving retail world, technology, and the circling vultures that were the discount pound stores. The downfall of the retailers that followed had some of these ills that inflicted them in the same way, although rents and business rates were also a factor.

However, could – or should – retailers present since 2009 have learned from the ghost of Woolworths, arguably still the biggest high street casualty the UK has seen?

Founded in 1878 in Utica, a town in upstate New York, US, Woolworths was crossed the pond in November 1909 with its first UK store established in Church Street, Liverpool. Its expansion took off in the mid-1920s, spreading to almost every UK high street. At one point it was opening a store at least once a month.

With its headquarters on Marylebone Street, central London, it was the go-to place for everything and was known for its Ladybird 0-13 children’s range, range of books, CDs, WorthIt! Value range, and of course, its Pic n’ Mix.

At its height, the retailer had over 850 units located in a mixture of shopping centres and high streets. In 2008, the business was employing a massive 27,000 people.

It could be argued that the first ominous signs of things to come for the chain started in October 1984, when the Woolworths stores in the Republic of Ireland were closed.

Just a year before Woolworths collapsed in the UK, property firm Savills was drafted in to try and find 6000sq ft units in small towns. It appeared the business wanted to move away from major cities, to go “back to basics”.

However, in November 2008, with four main board members – including property director Colin Carter – having left the company, and with crippling debts of around £400 million, trading in shares was suspended and the retailer went into administration.

By January 2009, over 800 branches had shut, and staff were made redundant.

While there were several reasons cited for Woolworths going under – such as the rise of the pound shop, lack of progression and unsure management – interestingly, property woes were not really highlighted. The chain had traded mainly from a single floor, in units traditionally on high streets or secondary pitches and with some leases estimated to be between 50–100 years.

“No, it wasn’t necessarily strangulation of the leases on the property side,” said Mark Robinson, president-elect of retail property lobby group Revo.

He also worked at Chartwell Land from 1997-2001, a firm that looked after the Woolworths’ freeholds.

“There were a number of sales and leasebacks, but fundamentally, nobody knew what Woolworths was for, and that included the management,” Robinson added.

Savills town retail director Steve Henderson said: “The problem with Woolworths [began] around when the pound shops started waking up.

“When Woolworths went under, those businesses there to take the units.”

In 2009 there were roughly 200 pound shops around the UK. Today, that number has mushroomed to around 1200, with Poundland being the most dominant of that sector.

The second pressure, according to Henderson, came from value retailers Home Bargains and B&M.

“But Woolworths just thought, ‘we’re fine, we’ll just stick by what we do’. They didn’t adapt.”

In hindsight, blame for the retailer’s collapse has also been placed on its lack of evolution.

“To me, looking back, Woolworths was the first harbinger of a retailer that didn’t have a purpose. A shop that tries to be all things to all people but serves nobody adequately,” Robinson reflected.

“Woolworths was this great brand everybody loved. And when it died everybody claimed it was their favourite shop for something – for records or for the Pic n’ Mix, and families who went there for the Ladybird clothes.

“But clearly, not enough people actually did shop there.”

Alfred Bartlett, partner and head of retail at Rapleys, doesn’t even believe a CVA – an insolvency process implemented by many retailers this year alone – would’ve even saved Woolworths.

“CVAs are certainly not new, although they became more popular – or at least more noticeable – around the time of the financial crisis when the squeeze on disposable incomes and the consequent effect on turnover exposed the frailties of many retail offers,” he explained.

“In the case of Woolworths there were clearly numerous factors present which were specific to both the time and the brand. Importantly, not all of these were property-based issues with the business being complex.

“Notwithstanding a substantial proportion of former Woolworths stores were subsequently successfully re-let to other retailers, many of whom were variety and value operators – the suggestion being the business could have been turned around – the juggernaut was arguably too cumbersome and slow to achieve anything other than a propping up of a failing brand through a CVA.

“Woolworths just thought ‘we’re fine, we’ll just stick by what we do’. They didn’t adapt.”

“Administration was the least painful option.”

Fast forward to today, and the question on whether modern-day retailers could or should have learned lessons from Woolworths.

“Lots could have been learned from it, but what you find is people thought ‘we’re nothing like Woolies, we’re different’,” Hopkinson said.

He pointed out that it was not just about being different: “What you’re missing is the fact the rules of the [retail] game have changed and the power within the rules of the game changing have just got faster because the increase in competition would not have been foreseen.”

In fairness to all retailers, and Woolworths in particular, Hopkinson believes no one could have predicted the increase in business costs, the rise in mobile devices in the hands of consumers, and the ability of technology to deliver goods so quickly.

In 2009, Shop Direct bought the rights to the name and trademark letting Woolworths online through Woolworth.com. For a while, shoppers had access to the Woolworths goods, but a cyber Pic n’ Mix was harder to recreate.

In 2015, the name finally succumbed when Shop Direct turned Woolworths.com in to Very.com.

In April last year, it was reported Woolworths could make a return to the high street. Speaking to the Daily Star at the time, former director Tony Page said: “I am still emotionally attached to it.”

He added: “I still think it has got a role in the future.

“[Owners of the rights to Woolworths, Shop Direct] have taken the website down, so I’m curious now as to what might happen next because I still think the brand has got some propriety in spite of what happened in the past.

“I feel as though if the brand name was available it would still be a possibility to bring it back [to our high streets].”

Despite this, 20 months on and nothing has yet materialised. Page was reportedly not able to obtain the rights to the Woolworths name.

Whatever happens, one thing it proves is that there is still a lot of nostalgia among a certain age for a brand, despite having no visible presence either on the high street or on-line – and that won’t go away.

However, within the story of Woolworths exiting the high street, the loss was more than just about a chain failing.

“People in these towns would have known the people who worked in Woolies, who were part of the community,” Hopkinson said.

“There might even have been generations of families who continued to work for the firm because they have been there a long time. So, [Woolworths’ collapse] did have a major psychological impact, let alone physical impact on retail property.”

Whether such an impact will be had with Maplin or BHS is debatable. But from the bloodbath currently happening on the UK’s high streets, more names are likely to join those already gone.

The question of whether the UK misses Woolworths from the high street or not is deftly summed up by Hopkinson.

“I don’t think [we miss it] because of the number of attempts to reinvigorate them,” he said.

“You’ve had so many other brands come along since, whether it’s the book shops of the world, or the stationary brands, or the supermarkets who have really filled any void that might have been created by Woolworths.

“Those of us in our 40s and 50s and beyond, remember them as children, going in there, but apart from that, the new generations, the modern millennials couldn’t give a monkey’s.”