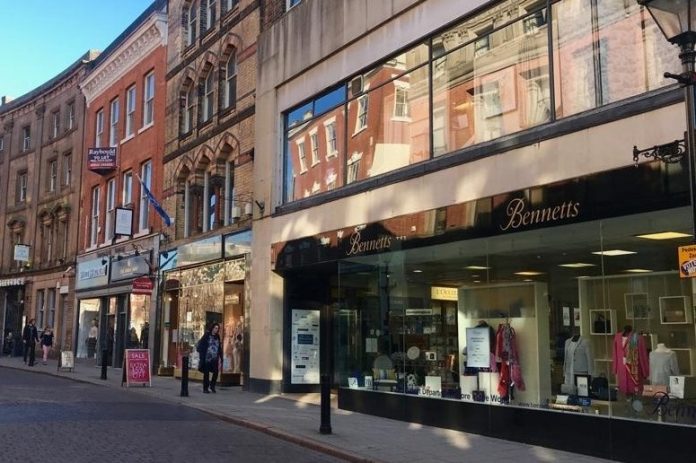 // Crowdfunding campaign to save Bennetts from collapse halted due to “technicality”

// Campaign was launched after Bennetts fell into administration last month

// Founded in 1734, Bennetts is thought to be the oldest department store the world.

A crowdfunding campaign to save Bennetts, dubbed the world’s oldest department store, from collapse has been temporarily suspended.

Last month, fashion company Young Ideas launched an online fundraising campaign on GoFundMe that features a detailed plan to save the historic retailer – which trades through two branches in Derby and Ashbourne.

The campaign was launched in response to Bennetts entering administration a few weeks prior.

However, sometime in the past few days, the crowdfunding page was taken down by GoFundMe. Clicking on the original link now redirects to GoFundMe’s homepage.

When Retail Gazette last checked the page late last week, just over £10,500 had been raised in the space of 10 days since it was launched.

This is only a fraction of the £450,000 goal that Young Ideas – which has a concession with Bennetts – needed to achieve in order to save the 285-year old business.

Before the campaign was suspended, Young Ideas had detailed a turnaround plan for Bennetts and said it was prepared to invest in the department store with the support of local stakeholders.

It stated that anyone who invested through the crowdfunding page would become a shareholder and would receive an annual dividend payment, along with other benefits.

Young Ideas also said that if its rescue plan were successful, it would retain staff and create jobs as well as turn Bennetts into a “mini John Lewis”.

However, under Financial Services Authority guidelines, GoFundMe is not regulated for investments. It is only a platform for donations.

In a statement, Young Ideas said: “The crowdfunding page is temporarily suspended due to a technicality.

“Due to the nature of the ‘Save Bennetts’ campaign, only sites that can support the process quickly could be considered.

“A business in administration only has weeks to be rescued, therefore, you need a platform with some agility.

“We believed we had worded things correctly by saying ‘once an investment threshold had been met and a deal structure agreed with the administrator we would issue a full prospectus to those that had expressed interest’.

“We are currently working with GoFundMe to find wording that will be acceptable to them so that the page can be reinstated.”

Young Ideas stressed that anyone who pledged money to its campaign would have their investment returned “in full” if ended up being unsuccessful.

Bennetts, which first opened its doors in Derby’s Cathedral Quarter in 1734, called in administrators from Bridgewood Financial Solutions in early February after being hit by weakening consumer confidence, online competition and growing costs.

The administrators said the heritage department store’s loyal customer base had not been enough to keep it going during a “very challenging” period on the UK high street.

Last week, they said they had received “significant” levels of interest from potential buyers and that discussions would continue over the next few weeks.

A formal announcement would be made should a sale be successful.

In the meantime, both Bennetts stores continue to trade as a going concern.