// Plans have been unveiled for a new designer village near Cheltenham

A brand new retail precinct is set to capitalise on the millions of visitors to the Cotswolds region after plans were revealed for a 195,000sq ft designer outlet centre near Cheltenham.

Dubbed an “outlet village”, it will be opened in two phases and will feature some 90 retail units, restaurants and cafes.

Construction is due to start on site in autumn 2020 with the first phase expected to open towards the end of 2021.

The scheme is poised to benefit from being in the catchment area of the Cotswolds Area of Outstanding Natural Beauty and surrounds, which attracts over 23 million tourists annually.

In addition, more than 9.8 million people live within 90 minutes drive of the scheme and the population within 60 minutes is 42 per cent greater in number than the average for other UK outlet centres.

Local shoppers living in the area are expected to account for over half of total annual revenue with passing traffic plus tourism predicted to provide the remainder.

Designer Outlet Cotswold is part of a wider retail development including a new 81,800sq ft garden centre, alongside an existing M&S Food store, Starbucks and a petrol station.

A planning application for 850 homes, school and local centre to the south has also been submitted and is awaiting determination.

“This is especially true for outlet shopping which has been bucking trends in the UK for several years generating significant interest amongst top brands and customers in the concept.”

Robert Hitchins development director Simon Tothill said: “Designer Outlet Cotswolds will be an eye-catching development reflecting the architecture and materials of the historic towns and villages of the Cotswolds.

“We’ll be creating a state-of-the-art retail destination with contemporary and adaptable units suited to the needs of modern shopping and dining.

“With a comfortable and welcoming environment, this will be a memorable addition to a day-out in the Cotswolds.” 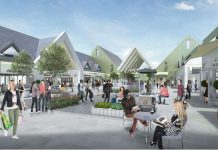 Coming soon: A brand new designer outlet village in the middle of Lincolnshire 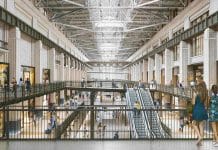