// The decline was prompted by the coronavirus lockdown

// BRC-KPMG found a year-on-year total sales decline of 4.3% in March

Retail sales in March have dropped to their lowest decline on record as the coronavirus pandemic took its toll on the sector across the UK.

The year-on-year total sales decline of 4.3 per cent in March was the worst ever recorded by the BRC-KPMG monthly survey.

In the first three weeks of the month, total sales rose 12 per cent but the lockdown prompted a 27 per cent drop in the final two weeks of the period covered, the BRC-KPMG Retail Sales Monitor found.

Over the three months to March, in-store sales of non-food items declined by 13 per cent on a total and like-for-like basis. 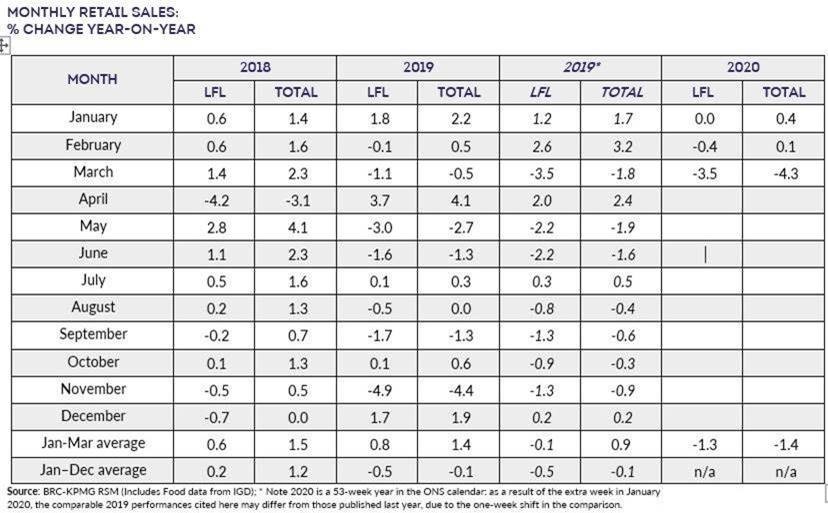 “In March, the necessary measures to fight the spread of coronavirus led to the worst decline in retail sales on record,” BRC chief executive Helen Dickinson said.

“Furthermore, the headline figure masked even more dramatic swings: food and essentials faced an unprecedented surge in demand in the early part of March, only to drop significantly into negative growth after the lockdown and introduction of social distancing in stores.

“The closure of non-essential shops led to deserted high streets and high double-digit declines in sales which even a rise in online shopping could not compensate for.

“Sales of computers and accessories, board games, and fitness equipment all rose sharply as a result of the move to home-schooling and work-from-home. In contrast, demand for the latest fashion ranges significantly declined.

“The crisis continues; the retail industry is at the epicentre and the tremors will be felt for a long while yet. Many physical non-food retailers have been forced to shut down entirely or to limit themselves to online only to protect customers and staff.

“Consequently, hundreds of thousands of jobs at are risk within these companies and their supply chains.

“At the same time, supermarkets brace themselves for lower sales, while still spending huge sums on protective measures, donating to food banks and hiring tens of thousands of temporary staff.

“We welcome the government’s actions to date, yet millions of livelihoods rely on their continued support.”

The news follows Springboard’s data on Wednesday which found an “unprecedented decline” of 41.9 per cent for the UK’s retail footfall in March.

Research released by the marketing insights firm revealed the impact of the government’s enforced lockdown from the coronavirus pandemic.

In the final three weeks of March footfall fell an average of 61.5 per cent.

Footfall across the UK’s bricks-and-mortar retail destinations were 83.1 per cent lower than Easter weekend last year, and 14.5 per cent lower over the same four days in the previous week.

In the final week of March, which was the first week of enforced lockdown, high street footfall fell 84.4 per cent against the same week last year.

Meanwhile retail parks, with are usually anchored by large supermarkets, saw a 71.5 per cent decline.