// Footfall in week two post-lockdown increased 7.7% on a week-on-week basis

// The second week of post-lockdown factored in Welsh retail, along with England & Northern Ireland

The reopening of non-essential retailers for the second week after exiting lockdown has led to another soft rebound in footfall, new data shows.

According to a special release of the BRC-ShopperTrak Footfall Monitor covering the week ending June 27 – the second full week since lockdown restrictions were lifted on non-essential retail in England and Northern Ireland – overall footfall across the UK decreased 53.4 per cent year-on-year.

On a week-on-week basis, overall footfall grew 7.7 per cent, party due to Wales’ first week of store reopenings while much of Scotland remained in lockdown.

READ MORE: Soft rebound in footfall in week 1 of post-lockdown

Footfall in week two post-lockdown was also much better than the 81.6 per cent year-on-year decline for the month of May when the whole of the UK was in lockdown.

However, retail parks were still the best performers in terms of footfall, with the post-lockdown figures an improvement on the 55 per cent year-on-year for the month of May due to a higher proportion of supermarkets and ease of parking. 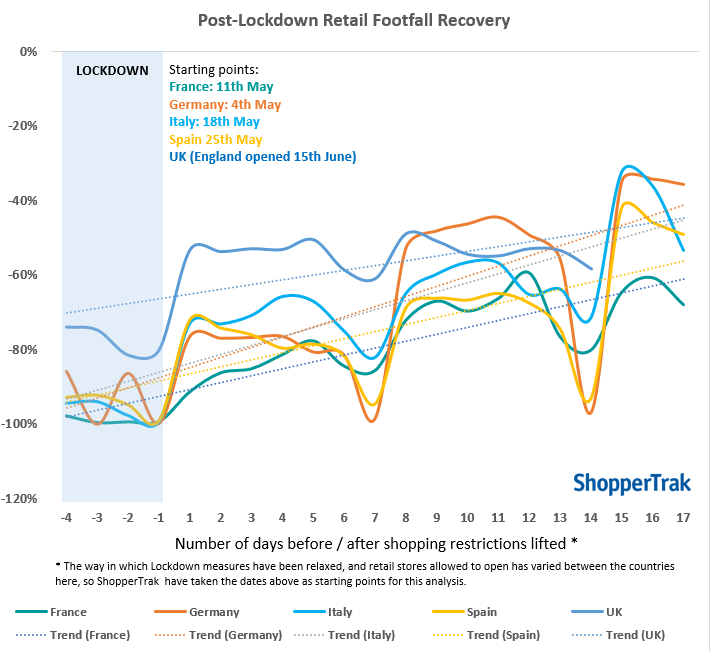 “Retailers will welcome the rise in footfall during the second week since lockdown was lifted in England,” BRC chief executive Helen Dickinson said.

“Retail parks continue to outperform other shopping locations, benefiting from ease of parking and the larger proportion of supermarkets.

“Without further increases in demand to drive consumer spending, many retailers will struggle to make ends meet, putting stores and jobs at risk.

“Government must consider ways to further stimulate the economy if it is to protect jobs, and reinvigorate our high streets and shopping centres.”

“Monday sees Scotland joining the rest of the UK, with its own steady and restricted approach.

“The high street and shopping centres showed signs of improvement and are starting to catch up with retail parks, albeit with some way to go.

“Monday and Tuesday may have benefited from a spill over of consumer enthusiasm, but this eased off until Saturday, which saw a 16.4 per cent week-on-week hike.

“Whilst UK footfall is heading in the right direction, early indications show that we’re following European trends, but slightly behind pace.

“The coming weeks will be critical. It may be too early to accurately predict how long this recovery will be, or where it’s eventually heading, but most retailers are doing all within their powers to bring back a confidence and enthusiasm for shopping.”