Kicking off in London’s beloved Soho this winter is Soho Speaks, a brand new series of free in-store talks celebrating the people behind the retailers in Soho.

Soho, located in the heart of London, is recognised for attracting individualism and creativity, and offers a variety of concept stores, original independents and international brands in the mix.

Ahead of Small Business Saturday on December 5, Soho Speaks presents a series of film interviews to celebrate independent businesses in the creative hub of London.

Consumers are able to tune into @ThisIsSoho on Instagram for exclusive videos and Q&As each week throughout November and December.

Soho Speaks kicked off on Wednesday in an interview on Instagram TV with well-known Soho tailor Mark Powell, who’s celebrating his 35th anniversary in the area this year.

He’s joined the list of business owners to give his insight into his Soho journey, what inspires his designs and shares his celebrity clients.

“This is a great insight to the independent brands of Soho and the people behind them. They are what makes Soho such a special place,” Shaftesbury retail director Samantha Bain-Mollison said.

Others to have been interviewed for the film series include Filiz Ayan, owner of independent women’s and men’s jewellery store Seven Mor, at 7A Newburgh Street. 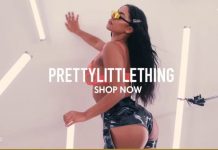