From Fairtrade chocolate to flowers, wine and coffee – major retailers across the UK have embraced the charity in an effort to boost funds for programmes that lift up communities in the Global South.

As Fairtrade Fortnight commences, retailers participate in activities to raise awareness of the farmers who help grow their food and drinks, mine gold and grow cotton for the fashion industry. 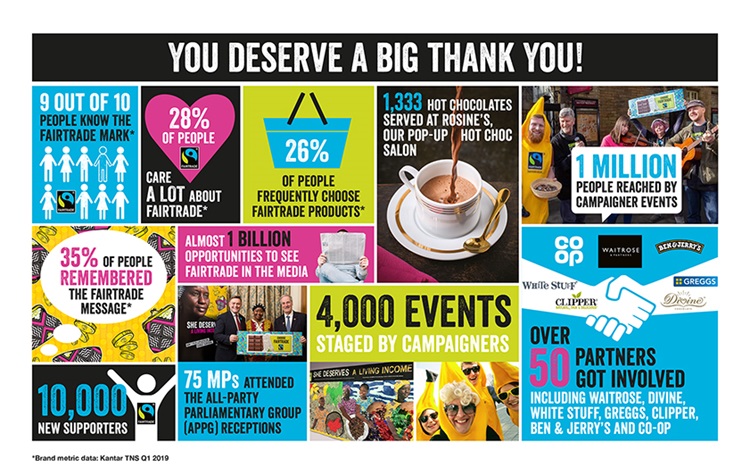 Fairtrade’s commercial director Catherine David said the Fairtrade movement has been going for over 25 years. It ensures consumers vote with their wallets and choose to pay farmers a fair price for the products they grow.

For Fairtrade Fortnight 2021, the Fairtrade Foundation is focusing on the theme of “Choose the World You Want”. It is asking retailers to tell others about the challenges that farmers face from climate change.

David said there was a “strong business case” for retailers to get involved, especially as it provides brand loyalty.

“There are 500 businesses who support Fairtrade, and over 1000 Fairtrade schools who are part of our scheme,” she told Retail Gazette.

“From a retailer perspective, you’ve got the opportunity to connect with those communities and generate positive media coverage for your brand and create uplifting sales.”

David added that this was the perfect time for retailers to get involved in Fairtrade Fortnight, particularly as the Covid-19 pandemic has presented an opportunity for consumers to educate themselves on ethical and sustainable topics.

Moreover, Fairtrade has increased its partnerships with retailers and brands as well as the number of farmers and workers – reaching a total of 1.7 million.

“You can find Fairtrade products in pretty much every supermarket now in the UK,” David said.

“The average shopper can now ensure that farmers are paid a fair price by purchasing a Fairtrade cup of coffee from Greggs or bananas from Sainsbury’s.

“We have great relationships with retailers here in the UK. We see lots of retailers such as Co-op and Waitrose doing events this year online.”

“The point of sale is telling their favourite stories and communicating to their shoppers that when you shop at Co-op, Waitrose, Sainsbury’s, and Marks & Spencer, you are paying a fair price to farmers,” David explained.

Co-op launched a pledge last year encouraging customers to swap their usual products for Fairtrade varieties, while Lidl sought to educate customers on the reasons why choosing a Fairtrade option was important.

“Fairtrade has grown from being something that you might expect to find in Co-op to something you can find everywhere. It’s all about creating that accessibility,” David said.

High street bakery chain Greggs, which considers itself an “active supporter of Fairtrade” said it would remind customers that “Your Drink Makes A Difference”.

A Greggs spokesperson told Retail Gazette: “We’ll be communicating with customers about how their everyday coffee makes a difference in our shops, across our digital channels and on Fairtrade’s online festival webpage.

“While last year we experienced a year like no other, our commitment to being a responsible business and dedication to doing good remains the same.

“To this end, our support of Fairtrade Fortnight remains consistent with previous years.”

David added that Fairtrade was interested in seeing what would happen in the wake of Covid-19.

“Consumers really became aware of the precariousness of our supply chains, and how connected we are when all of a sudden they couldn’t find products on shelves during the height of the pandemic,” she said.

“There’s been a real boom in consumer demand for Fairtrade products in 2020. We saw purchases up by around 15 per cent in retail.

“We have been tracking our consumer metrics, which show that over three quarters of consumers say they’ve actively chosen a Fairtrade product over an alternative.”

Oxfam’s head of community and retail engagement, Rachael Huttly, said the organisation was offering 20 per cent off all Fairtrade products in its Sourced by Oxfam range.

“Oxfam was one of the pioneers of Fairtrade more than 40 years ago and has been involved in its successful growth in the UK ever since,” she told Retail Gazette.

“This year with our high street shops closed due to the pandemic, the focus is on the Oxfam Online Shop and promotion through our social media channels.

“This year’s focus on the increasing impact of climate change on Fairtrade farmers and workers is especially timely as the UK hosts the UN climate summit in Glasgow later this year.”

With fewer shoppers in stores, retailers are expected to harness their online channels to raise awareness via digital storytelling or interactive tools.

Retail Insight’s head of marketing Dave Howard argued that the pandemic has accelerated the idea that retailers need to be more socially responsible.

“This year’s Fairtrade Fortnight highlights the challenges of climate change. Retailers that get involved in the movement are showing their commitment to supporting these workers and the ethical trading of goods,” he said.

This is increasingly important given that recent research from Euromonitor found that consumers expect companies to “act with purpose” this year and will buy from retailers that share their values.

Ocado recently launched a dedicated aisle for B-Corp brands – a sign of a longstanding commitment to support ethically-minded suppliers – in response to this rising demand in ethical initiatives.

A large percentage of the population are possibly more engaged than ever before, but also perhaps more cynical and wary of greenwashing.

David told Retail Gazette that this value-driven demand wasn’t a temporary trend, and was in fact a permanent behavioural shift.

“Retailers who realise that are going to benefit from this trend,” she said.

“Younger shoppers in particular expect retailers to be paying a fair price for stock.

“Fairtrade Fortnight is a big moment for all of our retailers.”

While there may not be the opportunity for in-store promotions, retailers have many tools to use such as promotions on Fairtrade products, links to stories about their Fairtrade suppliers on websites and in emails, and joint activities – supporting Fairtrade producers.

More importantly, Fairtrade Fortnight should serve as a long term commitment to the principles behind the Fairtrade message and not just contain weeks of concentrated activity.

Fairtrade Fortnight is undoubtedly a driving force behind raising awareness and making changes happen to the producing communities.