Since arriving in the UK in 1994, Lidl has grown to have 800 supermarkets, 13 distribution centres and more than 24,500 employees.

This figure and rapid growth is hardly surprising considering the discounter is owned by German-based The Schwarz Group, which has been Europe’s largest food retailer since 2014 and generated €41 billion (£35.6 billion) in revenue in 2019.

Lidl opened four new stores in December and committed to reaching 1000 stores across Britain by 2023 as part of its £1.3 billion investment plan for the next two years.

Although 2021 started off with Lidl being crowned as Supermarket of the Year at the Retail Industry Awards – beating the likes of Iceland, Sainsbury’s, Tesco and main rival Aldi – the grocer also revealed that its British operations had slumped to a £25.2 million loss. This was for its financial year ending February 29 last year, just before the Covid-19 crisis suddenly escalated across the world.

The losses came after Lidl spent £654 million adding another 51 stores during that year, along with a new warehouse in Motherwell, Scotland, while also increasing its UK workforce by eight per cent to 23,249 as it hired nearly another 1800 employees.

Nonetheless, the pandemic has brought a boom for supermarkets. Just last month alone, with the UK in the grip of yet another nationwide lockdown, shoppers spent £1 billion more on supermarket food and drinks compared with the same month a year ago. Kantar also found that overall grocery sales rose 12.2 per cent during the 12 weeks to January 24.

However, Lidl has arguably dodged the online boom that came in the wake of government-enforced lockdowns and other restrictions. Instead, it continued to focus on investing in stores and expanding its workforce.

The size of the online grocery market has doubled in the past year. Ocado is a pioneer in online supermarket shopping, while Amazon launched the anticipated “Morrisons on Amazon” offer, allowing customers to shop for Morrisons groceries directly via its website and app. Shoppers can also shop for grocery directly with Amazon, via its Amazon Fresh platform.

Grocery is not even the only sector facing a growing demand for online services. Last summer, a report by Alvarez & Marsal and Retail Economics estimated that 17.2 million Brits – about 25 per cent of the country’s total population – would make a permanent switch to online shopping.

Lidl has all the while remained staunchly opposed to selling groceries online. Lidl GB chief executive Christian Härtnagel last year said he did not believe the shift to buying groceries online was a permanent one. He also said it was too difficult to sell online and make a profit without undermining Lidl’s price promise.

Härtnagel restated this in Lidl’s most recent trading update, adding that the grocer “remains confident in its strategy and will will continue to hire more colleagues and open more stores”.

Fashion retailer Primark similarly became notorious for relentlessly refusing to jump online, despite losing £100 million a month last year. Most recently, its parent company AB Foods warned of a hit from lost retail sales of more than £1 billion if lockdowns force its stores to stay shut until end of February – raising questions of whether an online channel may be necessary amidst the crisis.

Although Lidl’s Plus loyalty rewards app – which launched in September – is a step forward in technology by offering customers new digital savings coupons on different products each week, it still encourages customers to go into stores to shop and receive £10 off for every £100 spent.

“Lidl obviously holds the belief that shopping will return to normality as the vaccine rolls out, cases full and confidence returns to the general population,” said Paul Adams, chief executive at marketplace services platform Tambo.

“They are still small players in UK grocery, so have plenty of share to fight for. The concern is that the game has changed.

“Looking at the trends in the summer of 2020 when most of the UK returned to normal, although online grocery sales fell slightly, it didn’t drop as low as pre-pandemic levels.”

Adams added that it appeared Lidl was sticking to a long term strategy formulated before Covid-19 struck.

“The game has changed and the players need to adjust to the new rules,” he warned.

“With consumers more willing to buy groceries online, more scale can be achieved through investment in online than store openings.

“That said, Lidl is expanding its store footprint from a low base, so whilst developing its online business would be a better choice, opening more stores could still work for them in the short term.”

Meanwhile Kris Hamer, vice president of research at Retail Insight, argued that Lidl’s investment in its store network was the right move. He said that the post-Covid forecast for the discounter’s share of grocery sales continued to go in a positive direction – from 12.8 per cent in 2019 to 14.6 per cent.

“It’s worth remembering that while online is experiencing near-perfect conditions to grow share in January 2021,” Hamer said.

“Lidl will have been relatively insulated from the switch to online because a significant proportion of their customer base will continue to demand the lowest prices in the market, through whichever channel they are offered.

“The pandemic has led many shoppers to be less keen on shopping around, so Lidl will need to rely on a shift in consumer behaviour where consumers were more inclined to split their shops as much as they were doing pre-pandemic.”

Andrew Howell, global marketing director at software for retail manufacturer K3 Business Technologies, said that at a time when the high street was seeing yet another increase in shop vacancies, the bricks-and-mortar expansion plans from Lidl is a bold move.

“There will be a time when footfall will eventually return and people will welcome back the small pleasures of being able to do their weekly shop in person,” he said.

Howell added that other retailers could learn from Lidl by listening to what their customers value.

“Lidl has a very clear, focused and distinguished brand that has made notable gains in cutting out the middleman,” he said.

“As such, customers return to Lidl for the quicker, more efficient and cheaper in-store shopping experience.”

Howell also said there would always be individuals who want to physically visit the supermarket and handpick their food for the week. While online grocery shopping will likely remain a popular choice for some, there were still those who would have only shifted to online shopping recently out of necessity, thanks to the pandemic and the lockdown and stay-at-home orders it brought about.

“What Lidl must ensure now is that it delivers on the seamless, efficient, and minimal contact experience consumers have come to expect,” Howell explained.

Much like Marks & Spencer recently introducing alternative on-the-spot payment solutions to speed up the shopping process for customers, Lidl needs to make sure it has in place the right innovative technologies to ensure the customer’s in-store experience is as seamless as possible.

Other than offering products at low prices, what arguably sets Lidl apart is that it is one of the few retailers increasing its UK workforce. It is also one of the highest paying supermarkets, paying staff £9.30 an hour outside London and £10.75 inside the M25 – above the minimum wage.

Retail expert Nelson Blackley said that as a privately-owned retailer, Lidl’s investment decisions would be based on their view of the long-term sustainability of their business model.

He explained that Lidl’s expansion plans, which involves significant levels of investments of some £1.3 billion for 2021-2022 – hot on the heels of the £1.4 billion investment drive in 2019-2020 – was an indication of its commitment and long-term confidence in the UK grocery market.

“The record 80 per cent increase in grocery online shopping since March 2020 has been the direct result of consumers wishing to avoid crowded supermarkets,” Blackley said.

“Grocery shoppers who have tried online shopping from the first time over the past year will have found it an efficient and easier experience than taking an hour or so to drive to their local large supermarket and handle each product twice or three times.

“Many will stick with this change of shopping habit, in particular those who continue to work from home and so can accept home deliveries throughout the day.”

Blackley added that many supermarkets have already invested millions over this period to increase their home delivery capacity and online efficiency – employing thousands of new staff to both pick and deliver online orders.

Retail expert and founder of The Resilient Retail Club, Catherine Erdly, said that although it appears counter-intuitive to expand so extensively in such a difficult climate, a lot of these store expansions would have already been planned before the pandemic struck.

“Lidl has resisted the allure of online shopping for a long time and what they are really positioning themselves as is the go-to value retailer for people wanting convenience and great prices, rather than trying to establish themselves in the very competitive online grocery market,” she told Retail Gazette.

“It’s not surprising how challenging the margins already are in the grocery market and the additional cost of online shopping may just be too great for them to bear.

“It’s not necessarily a bad strategy for Lidl because customers may return to physical shops once the pandemic eases, and Lidl has the advantage of having built the discovery element into many of their store formats.

“Customers enjoy the experience of coming back to a physical store and being surprised by what’s on offer in ‘the famous middle Lidl aisle’.”

It’s no secret that the pandemic has rewritten the rules of retail, with many businesses having to adapt to the ongoing restrictions. However, shopper promiscuity is rife, so the more channels that a retailer covers, the fewer reasons shoppers will have to look elsewhere.

There is no doubt that a move into online from Lidl would disturb the grocery market. The sector is already seeing this with the first tentative steps into online grocery taken by its main rival, Aldi. In addition, the Big 4 grocers have benefited from online shopping minus the presence of the discounters.

Online and discounters are the two channels with the least overlap, so Lidl’s break into online could attract a brand-new type of shopper, who has a bigger basket and greater spend. 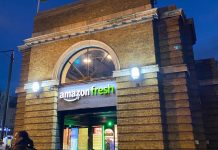