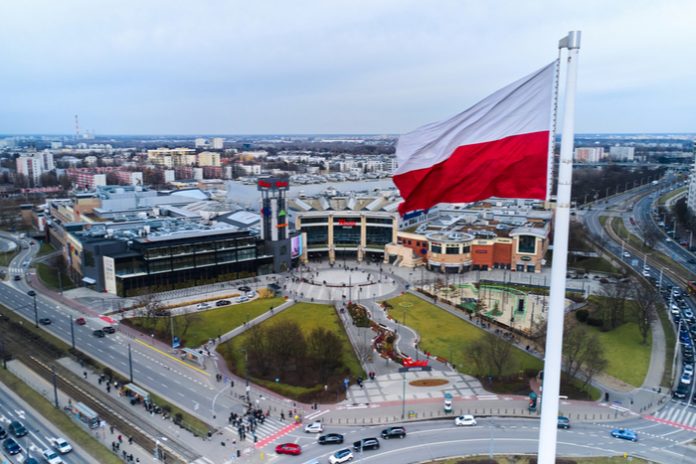 When the Covid-19 pandemic struck the country, Poland’s government introduced a number of restrictions, including a trading ban in retail schemes of above 21,500sq ft – with the exemption of super or hypermarkets, pharmacies, dry cleaners and drugstores such as Rossmann, Hebe and Natura.

The ban was withdrawn in phases starting May 4 last year, but as the pandemic continued, some restrictions were introduced. These included a limit on the number of people per cashier and early hours for elderly shoppers – when only people above 60 years old could shop.

Poland’s economy crashed further when the country went into a fourth full-scale lockdown on March 22. It only ended earlier this week on May 3.

Despite the restrictions, Poland’s March retail sales at constant prices were 15.2 per cent higher than the year before – against a decrease of 8.9 per cent in March last year, according to Statistics Poland.

In a recent report, Statistics Poland found that the largest increase in retail sales was seen across trading in textiles, clothing, and footwear, which increased by 93 per cent, against a decrease of 49.6 per cent the year before. Meanwhile, sales of furniture, radio, TV and household appliances increased by 39 per cent from 15.9 per cent last year.

Some of the biggest retailers in Poland include Rossman, Zabka, Dino, and Biedronka. But according to Statista, the winner of the retail chains’ ranking in the food category last year was German discounter Lidl.

According to Trading Economics, Poland’s retail sales have increased the most in 10 years after surging 17.1 per cent year-on-year in March – the highest reading since April 2011, following a 2.7 per cent drop in the prior month.

More recently, Pepco Group was valued between €4.8 billion (£4.1 billion) and €5.8 billion (£5 billion) as it launched the IPO. The offering, which is directed to retail investors and institutional investors in Poland, is comprised of up to 102,718,447 existing shares, representing around 17.9 per cent of the company’s total issued share capital at admission.

Pepco Group trades from more than 450 Poundland stores in the UK, but its total portfolio consists of over 3000 stores – mostly Dealz and Pepco fascias – across 15 European countries. In Poland alone, there are more than 1000 Pepco stores, alongside a presence of Dealz stores.

Pepco’s business model focuses on offering cash-based discounts on clothing and houseware items to the lower income middle class segment of the market in small-to-medium-sized towns across Poland and other countries in Central and Eastern Europe.

According to Santander, Poland’s main assets are its strategic position, a large population of 38 million, its EU membership, economic stability, cheap skilled labour costs and a fiscal system attractive to businesses.

Although the retail sector in Poland provides attractive investment opportunities for overseas businesses and investors, warehouse properties have also been in demand in recent years. Poland’s key strengths include its geographical location, a relatively strong economy, high-quality properties offering better rates of return compared to Western European markets, and stable or growing demand. All this attracts overseas capital.

Prior to the Covid-19 pandemic, investment activity in the Polish retail market hit €1.95 billion (£1.69 billion), largely in line with the transaction volumes in the last five years, according to a 2019 report by Cushman & Wakefield.

Investment funds have been targeting either retail or office properties in Poland for years. The last five years have seen steady growth in interest in the warehouse market, driven by several key factors, including the disruption on the retail market, making it less attractive for investors; and the focus on portfolio diversification.

“As always, when you look at expanding internationally it is crucial for UK retailers that want to connect with Polish consumers to make sure they adapt to the market,” said Tony Preedy, managing director of online marketplace Fruugo.

He added that Polish retailers needed to opt for a diverse set of sales channels as this is key, especially in the early stages “as you figure out what best resonates with your target consumers”.

“While many consumer patterns are similar across the globe, you can easily miss out on sales by not honing in on the specificities,” Preedy said.

He added: “Poland is a large European market with a growing base of consumers shopping online.”

Despite Poland’s attractive market, British grocer Tesco sold its entire Polish supermarket division for £181 million last year as part of a series of retreats from international operations led by then-chief executive Dave Lewis. The decision to leave Poland after 25 years was to allow Tesco to focus attention on its businesses in the Czech Republic, Hungary and Slovakia.

The new owners, Salling Group, now control 301 Tesco sites in the country, adding to the Danish firm’s portfolio of shops in Germany and Denmark.

“It is crucial for UK retailers that want to connect with Polish consumers to make sure they adapt to the market.”

Tesco opened its first stores in Poland as early as 1995. It came to Poland at a time when the country was transitioning to a free market economy after decades of isolationist communism rule. The retail giant made a bet that the Polish people, who at the time shopped in small stores, would soon turn their trolleys to its sprawling megastores.

In 1997, Tesco moved its Polish headquarters from Bielsko-Biała to Kraków, and a year later opened its first big-box outlet in Wrocław. Over the next two decades, the Big 4 grocer expanded to a peak of 450 stores across Poland, which became its second-largest foreign market by store numbers.

Yet since then retail in Poland has evolved, with Tesco trailing behind. Polish people have moved away from shopping at out-of-town megastores and small shops, and towards smaller chains and discount stores.

Trouble began in 2015, when the company replaced the head of Tesco Poland and moved its operations centre from Poland to the Czech Republic. This also saw the Big 4 grocer centralising its sales for Poland, Slovakia, the Czech Republic and Hungary – a strategy which it later backed away from.

Overall, Poland’s grocery sector has not majorly suffered from the pandemic – similar to other nations where essential retailers were able to stay open amid lockdowns. O

n the other hand, online shopping increased as the pandemic gave a boost to ecommerce in all sectors of Polish retail. Yet when the pandemic struck, Polish online grocery was still at a very early stage of development. As with many other countries, Polish consumers also turned to the internet to buy their groceries in unprecedented numbers as they were ordered to stay at home.

Polish grocery chains moved fast to meet the jump in demand. Hardly a week went by in 2020 without reports of grocers launching or ramping up ecommerce. There was also a veritable explosion of click-and-collect services.

For retailers, they offered a good way to start with online shopping, or to extend it to new cities quickly. And they proved popular with customers, combining safety, speed, and affordability.

Despite this growth, Poland has seen the number of shops drop by 1800 in the last year – particularly small grocery stores, independent chemists, kiosks, and megastore supermarkets – according to NielsenIQ.

Poland had an estimated 99,400 shops at the end of 2020. While the downward trend in the number of shops has been present for a decade, it has now accelerated, with twice as many shops closing in 2020 as in the previous year.

NielsenIQ said consumers in Poland were reconsidering the necessity and frequency of visiting supermarkets and are now considering more online alternatives where available.