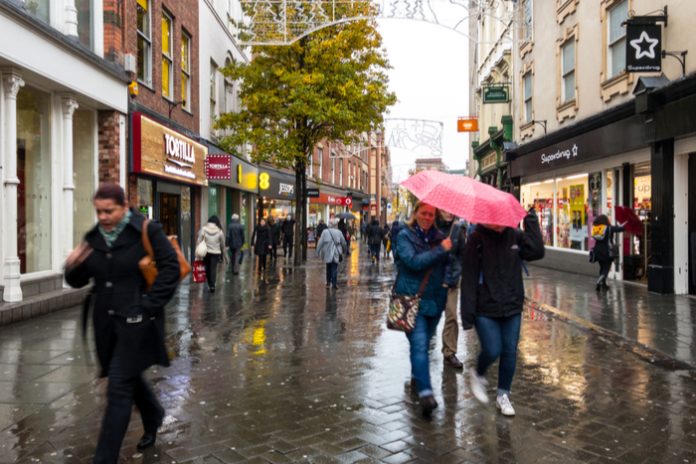 // Footfall in UK retail destinations declined by 4.1% last week from the week before due to weather

// It marked the first full week since Northern Ireland exited lockdown, meaning all the of the UK was now reopened

Footfall in the first full week since all non-essential retail across the UK has exited lockdown was hampered due to wet weather, according to new data.

Insight from retail experts at Springboard reveals that overall UK footfall declined by 4.1 per cent for the week beginning May 2, compared to the week before.

That week came shortly after non-essential retail in Northern Ireland was finally allowed to reopen on April 30, making it the last country in the UK to exit lockdown.

Scotland’s lockdown on non-essential retail was lifted on April 26 while for England and Wales it was April 12.

Springboard said last week’s week-on-week dip in footfall was largely due to poor weather in parts of the UK, with activity in high streets down 6.6 per cent.

Retail parks and shopping centres footfall performed better, but still declined by 1.3 per cent and 1.5 per cent respectively.

The week-on-week reduction in footfall was also widespread across the UK, spanning all areas apart from Northern Ireland, where the rise in footfall of 21.1 per cent reflected the impact of the reopening.

Meanwhile Central London, which throughout the pandemic has been the most severely impacted city in the UK, footfall remained virtually level with a dip of just 0.8 per cent from the week before compared with a drop of 5.2 per cent in Outer London.

“Rain across much of the UK for most of last week meant that footfall dipped again from the week before,” Springboard insights director Diane Wehrle said.

“The impact of the rain was evident, with a more modest drop in activity in the enclosed environments of shopping centres and in retail parks that are easily accessible by car than in high streets.

“The ongoing resilience of retail parks throughout the pandemic in retaining shopper numbers meant that last week footfall in this destination type was only marginally below the 2019 pre-pandemic level.

“In contrast footfall in both high streets and shopping centres remained more than a quarter below than their levels in 2019, however it is likely to be these two destination types that will receive the greatest boost from the reopening of indoor hospitality next week.”