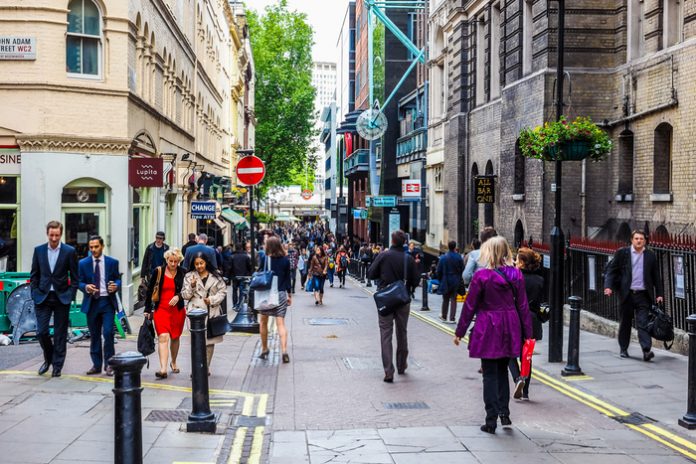 // However it was 240.8% higher than the same month last year in the midst of the first lockdown

Retail footfall significantly improved throughout April as pandemic restrictions were eased but remained firmly below pre-pandemic levels, according to new figures.

The latest monthly monitor by research firm Springboard revealed that footfall in April was almost a third, 32.7 per cent, below the levels seen in April 2019.

It said footfall was 240.8 per cent higher than the same month last year, although this was unusually depressed due to the first national lockdown.

Footfall was particularly weak at the start of April but noticeably improved following the reopening of non-essential retail stores and outdoor hospitality.

In the first week of April, UK high streets reported a 65.1 per cent decline in footfall against the same period for 2019.

Restrictions were eased in England and Wales during the second week of the month, helping to lift footfall to a more muted 32.3 per cent decline against 2019 for the second to fourth weeks of the month.

High streets reported a 41.5 per cent fall in footfall for April against 2019, while retail parks were the most robust shopping location, with just a 7.4 per cent drop in footfall.

“The results for the month reflect our predictions for a substantial boost to footfall following retail reopening and is evidence of significant pent up consumer demand for bricks and mortar stores,” Springboard insights director Diane Wehrle said.

“This pent-up demand is also reflected in the UK store vacancy rate which strengthened in April to 11.5 per cent from 11.7 per cent in January.

“At least part of this is likely to be due to the increasing emergence of pop up stores and the trend for digital brands to bring their brands to life via physical space.

“With the imminent opening of indoor hospitality in the next two weeks, we are anticipating that the gap between the level of footfall in 2019 and 2021 will narrow further, although the extent to which this occurs will be a function of the degree to which there is a return to office working, the growth in both domestic and overseas tourism in the UK and the impact on employment of the end of the furlough scheme in September.”