Hugo Boss has predicted that the business will continue to improve in the second half of the year, with revenues almost returning to pre-pandemic levels in the second quarter.

Sales recovered in key markets such as Britain and China in the quarter.

Tommy Hilfiger chief executive Daniel Grieder, who is due to present his strategy later today said: “We are well prepared to further drive our business recovery also in the second half of the year.”

The retailer said its core Boss brand saw sales down a currency-adjusted 5 per cent, while Hugo, aimed at a younger audience, reported a sales increase 2 per cent.

As the sales of casual styles continued to accelerate as the working from home trend boosts more relaxed dressing, Hugo Boss said it had also seen a recovery in sales of formalwear due to pent-up demand for business and party fashion-wear.

Hugo Boss, already reported preliminary second-quarter results last month and added that  sales were up 7 per cent compared to 2019 in the United Kingdom, and up 33 per cent in mainland China.

The recovery in China came despite calls for a boycott of Western brands launched in late March over Western accusations of forced labour in Xinjiang when at least three Chinese celebrities said in March they were dropping Hugo Boss.

Meanwhile, sales in Europe were just 4 per cent lower than 2019, while sales in the Americas were down 5 per cent.

During the second quarter, around 20 per cent of the retailer’s global store network remained closed.

The company reiterated that it expects currency-adjusted group sales in fiscal year 2021 to increase by between 30 per cent and 35 per cent. 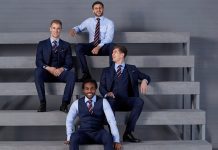 M&S pulls suits from more than half of its stores