Full-year results released today by fashion retailer French Connection show its profits fell over 30 per cent last year due to squeezed margins and poor sales in the UK.

Chairman & CEO of the business Stephen Marks described trading over the winter months as the worst he had ever seen, as a 4.6 per cent rise in UK & European like-for-like sales during the first half of the year ending January 31st 2012 was completely offset in the second half to leave revenues for these regions flat for the full-year period.

Revenues overall rose five per cent year-on-year thanks to strong growth in its international and wholesale operations but with the domestic consumer spending outlook far from rosy, French Connection will now conduct a retail review to try and revitalise its core UK business.

Marks said: “During the past year our wholesale, international and licensing businesses have performed well, however, in the most difficult winter season I have seen in all the years I have been in business, our UK retail division has been very disappointing and this has had a significant effect on our results for the year.

“In the light of the performance of the UK retail division we are reviewing our retail operations in order to improve sales and margin in this core business. We are very aware that there will be no quick solutions and that changes we make will take time to have an impact.

“We are working very hard on improving the performance of the retail stores, although clearly the state of the UK economy is not helping the position.”

Profits fell from £7.3 million during the previous financial year to £5 million for the period just ended, while adjusted earnings per share dropped from 7.5p in 2011 to just 4.7p.

French Connection found customers reluctant to spend outside of discount periods, and this, combined with higher input costs, meant gross margin in the retail channel dropped from 59.9 per cent to 55.6 per cent.

The retailer‘s store portfolio is likely to decrease as a result of the tough trading conditions, with 14 stores targeted for closure if rents can not be reduced when their leases come up for expiry over the next two years.

Wholesale revenues in the UK & Europe rose 17 per cent during the year, operations in Asia & North America performed strongly, and overall licensing income grew 47 per cent to £8.5 million

With these successes, no debt and net cash of £34.2 million, the group hopes that despite the significant challenges it faces the group has a steady platform on which to adapt to current market conditions.

Marks added: “We have demonstrated our ability to produce fashionable, wearable products over the last 40 years and will continue to do so.

“With the help of the review of operations, a strong balance sheet and our global brand, we will return the business to the level of profitability we feel the group deserves.” 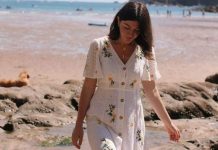