HMV Group has today announced its decision to sell Hammersmith Apollo for £32 million.

The sale, which will see Hammersmith Apollo Limited taken over by Stage C, a company jointly owned by Ansco Music Club Limited, a company within the Anschutz Entertainment Group (AEG), and getgo Consulting GmbH, aims to allow the music specialist to concentrate on its core business strategy.

Upon completion, the disposal will allow the Group to amend its £220 million Bank Facility with existing lenders, extending it to September 30th 2014.

Developing the beleaguered company‘s retail offering is crucial in order to maximise value for stakeholders and the Group expects the disposal to be completed by the end of August this year.

CEO of HMV Group Simon Fox explained the move, as proceeds from the disposal will reduce outstanding debt.

“The Hammersmith Apollo is an iconic London venue and it has been a privilege to own it over the last three years,” he said.

“However the sale will enable HMV to extend its bank facilities, strengthen its capital structure and ensure a strong future for the Group.”

Earlier this month, the entertainment retailer announced predicted losses for the 52 week period ending April 28th 2012 to total £16 million, despite a reduction of around 30 shops in its store portfolio last year.

Although the disposal is conditional upon shareholder approval, the Group feels that AEG is well-placed to take over the famous venue.

“They and their partner buyer CTS EVENTIM, the leading European ticketing services provider, have impressive and exciting plans for the Hammersmith Apollo and we wish them well.” 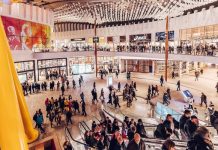 Findel to dispose of healthcare division