Footfall in London‘s West End soared 13.5 per cent on Tuesday as visitors celebrated Team GB‘s Triathlon win by hitting the shops, it has been announced.

While East London saw an 8.3 per cent drop in footfall for the same day, tourists and supporters flocked to Hyde Park to support Alistair and Jonny Brownlee, who took gold and bronze medals respectively at the Olympic event.

Although the number of shoppers on the high street plummeted on the Saturday following the opening ceremony, Britain‘s sporting success on ‘Super Saturday‘ raised spirits, with East and West London reporting a 4.3 per cent and 4.5 per cent year-on-year boost on Sunday August 5th.

However, on Monday the figure fell again, as East London saw a 2.5 per cent year-on-year decrease while West London footfall dropped 2.7 per cent.

Yesterday, official Olympic sponsor Visa revealed that spend via Visa cards has reached £456.9 million during the first week of the Games as a feel good factor gripped the nation.

A spokesperson for Experian explained the figures, saying: “Most notable here is the impact of Tuesday‘s Triathlon event which took place in and around West London‘s Hyde Park.

“Footfall outside of the Olympic Park was clearly diverted to the event where spectators didn‘t require a ticket to witness historic victory for the Brownlee brothers and subsequently dispersed into nearby shops.” 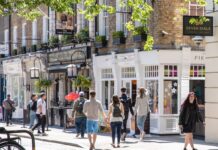