Luxury fashion label Burberry has today reported a total sales rise of nine per cent to £613 million in its third quarter as it re-affirms its place at the top of the luxury market.

Like-for-like (LFL) sales grew six per cent in the three months to December 31st 2012 while retail revenue reached £464 million, a 13 per cent increase on the same period last year.

Sales of outerwear represented around half of mainline growth, the brand said while scarves, mens tailoring and accessories drove sales, while it‘s Prorsum and London labels increased penetration by five percentage points year-on-year.

Regionally, Hong Kong and China have recorded double-digit LFL growth along with other emerging markets, easing the pressure on the retailer‘s international efforts following disappointing growth in the Americas and Europe while sales in Korea and Italy remained weak.

Commenting on the British brand‘s international strategy, Jon Copestake, Retail Analyst at The Economic Intelligence Unit, noted: “Burberry has endured mixed fortunes over the last few years as profits and sales have seesawed on speculation over the wisdom of heavy investments in the Chinese market.

“The underlying growth in these latest figures highlights a newfound confidence that, after a slight wobble in 2012, China remains on track to deliver growth. Burberry also looks set to broaden its appeal and exposure in 2013 by recruiting Romeo Beckham to model products.

“However, luxury retailers in general may be revisiting their Chinese operations soon.

“Both could potentially undermine ongoing store investments in China.”

During the quarter period, Burberry opened seven stores and four concessions and closed two and five respectively and average retail selling space is set to rise by around 14 per cent.

In terms of online, the group noted that digital commerce had “outperformed” and highlighted its Spring 2013 advertising campaign which generated record social media engagement.

Wholesale sales however, failed to impress and declined five per cent on an underlying basis over the quarter, reflecting lower sales to small specialty accounts in Europe, though Burberry stated that dsles in the US, Asia Travel Retail and emerging markets are set to grow in the coming months.

Looking ahead, Burberry CEO Angela Ahrendts said: “Burberry delivered 13 per cent underlying retail growth in the third quarter, benefiting from a particularly strong week in the run up to Christmas.

“In an otherwise difficult quarter, core outerwear, mens and digital all outperformed.

“We expect the external global environment to remain challenging, but see continued opportunities to drive productivity in our existing business, while investing for growth in under-penetrated regions, product categories, channels and mediums.” 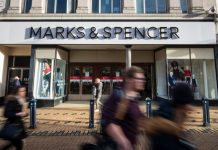