From glacÃ© cherries to piping bags to baking trays, the ninth series of BBC‘s BAFTA-nominated Great British Bake Off is having the welcome effect of boosting sales on the UK‘s high street. Both baking ingredients and equipment have increased in popularity since the show recommenced in what has been termed the ‘Bake-Off effect‘, in particular Mary Berry‘s collection of bake ware available exclusively at Sainsbury‘s.

The show, hosted by Mary Berry and baker Paul Hollywood and comedians Mel Giedroyc and Sue Perkins, has been running since 2010, achieving ratings of over 9 million viewers for the series‘ finales.

The news will help to allay fears over the on-going price war between the UK‘s supermarkets that is hitting the profits of some of the biggest names in the business. Last month, Waitrose was forced to issue a profit warning because of the cost of refurbishing stores and investing in a membership scheme that offers shoppers free coffee. Other brands, such as Morrisons, Tesco and Sainsbury‘s have also seen a drop in like-for-like sales.

Debenham‘s has reported an increase in sales of baking equipment, including baking trays, oven gloves, weighing scales and measuring jugs. Waitrose said that sales of glacÃ© cherries rose by 25 per cent after Mary Berry baked a cherry cake on the show. Similarly, Sainsbury‘s has reported a 30 per cent increase in the sale of flaked almonds after Mary Berry baked Florentines last month, which saw the elimination of contestant Jordan from the show. After the now infamous Baked Alaska incident, referred to as ‘Bingate‘, sales in ingredients needed to make a Baked Alaska have increased by 5.8 per cent.

The show has also led to ice-cream scoops rising 10 per cent compared to the same week last year, while cake tins and sandwich tins rose 22 and 31 per cent respectively.

Could this baking revival be a coincidence? Not according to Susi Richards, Head of Own Brand Product Development at Sainsbury‘s. “There is clear evidence that our shoppers are immediately inspired when watching cookery shows like the Great British Bake Off” she says. “We have seen that sales of our kitchen equipment and bakery goods peak online between 7-9pm on a Wednesday, directly around the time the GBBO airs.”

This is not the first time a television show has driven sales in cookery. In 2006, celebrity chef Nigella Lawson helped boost sales of goose fat when she promoted its use to roast potatoes. Equally, Jamie Oliver increased the popularity of nutmeg fourfold when he suggested using it as a seasoning on pasta. 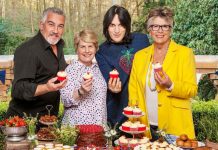