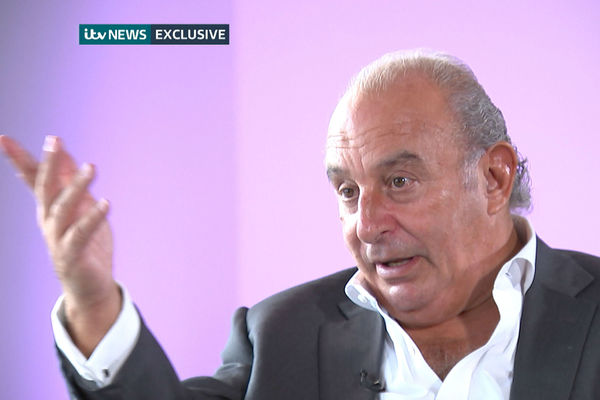 Retail tycoon sir Philip Green has apologised on national TV to former BHS employees for the “hardship and sadness” they have endured since the business collapsed.

In an interview with ITV News, Green – whose Arcadia Group empire owned BHS from 2000 to 2015 – admitted that selling the high street chain for £1 to serial bankrupt Dominic Chappell was a “horrid decision”.

“I want to start with saying how sad and very, very, very sorry I am for all the hardship and sort of sadness caused to all the people who worked there, and all the pensioners,” Green told ITV.

The retail mogul has been embroiled in controversy after it was revealed that he took more than £400 million in dividends from BHS, which critics say affected more than 11,000 jobs and left a £571 million pension deficit.

However, Green insisted he “did everything possible” to keep department store chain from going bust.

“I hope and believe all the people that worked very closely with me at BHS for all those years, and some for the whole journey, will know it was never my intention for the business to have the ending it did,” he said.

He went on to say that Chappell, who had no retail experience, was “clearly, categorically the wrong buyer” and did not want to “make any excuse” for it.

“But we made that decision and, you know, for the last year, and on a daily basis, I, and my family, have got to live with this horrid decision, and trust me, these are not fun days,” Green said.

Green also told ITV News that fixing BHS‘ pension deficit was now his top priority and that he was in a “strong dialogue” with the Pensions Regulator to sort this out.

However, in a statement released after the interview last night, the Pensions Regulator said: ”Our focus remains on achieving the best possible outcome for members of the BHS pension scheme and PPF levy payers and our discussions with Sir Philip Green and his advisers about a possible settlement are ongoing.

“We are yet to receive a comprehensive and credible written proposal and have made clear what we require in this regard.”

Green said the dividends were proportionate to the company’s profits at the time that they were taken, adding that the retailer at the time was paying £160 million in profits.

“The dividends were not funded out of debt, as has been previously suggested, they weren’t stolen or taken out of anyone else’s money, they were monies made,” he said.

The TV interview was aired just as Green‘s lawyers – Lord Pannick QC and Michael Todd QC –released their review into the parliamentary inquiry on the retailer’s collapse, calling the MPs’ report “bizarre” and “unsupportable”.

However, Field said the report was “agreed unanimously” by MPs from two different select committees and there were “huge amounts of evidence” to support it.

Business, Innovation and Skills Select Committee chairman Iain Wright said: “The report from Sir Philip Green’s no doubt expensively-appointed lawyers is just the latest wheeze by Sir Philip to wiggle off the hook for his responsibilities to BHS pension holders.