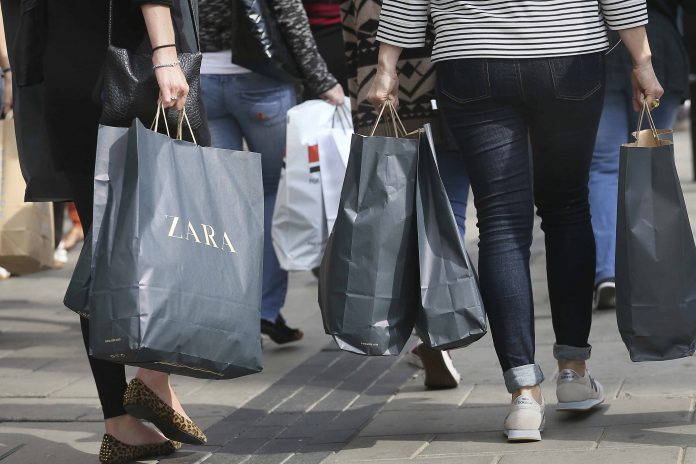 Retail sales have defied persistent pressure from higher inflation thanks to a boost from back-to-school and autumn fashion sales.

The latest BRC-KPMG Retail Sales Monitor for August showed like-for-like sales edged up by 1.3 per cent, rebounding from a 0.9 per cent fall in August last year when retailers suffered a blow soon after the Brexit referendum.

Meanwhile, total sales rose 2.4 per cent as shoppers splashed out ahead of the new school term, compared to a 0.3 per cent decline in the same period last year which had been the poorest performance of 2016.

The total sales rise is also the  strongest growth since Easter, above the three-month and 12-month averages of 1.9 per cent and 1.6 per cent respectively.

However, in the  three-month period leading up to August, in-store sales declined 1.4 per cent on a total basis and 1.9 per cent on a like-for-like basis.

In that same three-month period, food sales remained robust, easing back by 0.2 percentage points to 3.2 per cent, which is still above the annual average of 2.7 per cent.

On the other hand, non-food retail sales in the three-month period to August increased 0.6 per cent on a like-for-like basis and 0.9 per cent on a total basis, also above a 12-month total average growth of 0.6 per cent.

The sales monitor also showed that online sales of non-food products grew 11 per cent in August, above both the three-month and 12-month averages of 9.8 per cent and 8.8 per cent respectively.

Despite the brighter update, British Retail Consortium (BRC) chief executive Helen Dickinson warned of a tough road ahead for retailers if consumers tighten their belts.

Retailers “running out of options” to protect public from price hikes

“These figures tell a less positive story about the health of consumer spending than it might seem at first glance,” she said.

“Non-food sales have only just recovered to levels seen two years ago, after a dismal August in 2016; while strong figures for food are largely the result of rising prices, leaving growth in volume terms weaker than last year.

“Stark challenges lurk around the corner for the retail industry.

“Purchasing decisions are very much dictated by a shrinking pool of discretionary consumer spend, with the amount of money in people’s pockets set to be dented by inflation and statutory rises in employee pension contributions in a few months’ time.”

Consumer spending and confidence has endured sustained pressure from slow wage growth and rising inflation, leading to an expansion of credit and a decline in savings.

However, the cost of living remained stable at 2.6 per cent in July, according to the ONS Consumer Price Index (CPI), as a drop in fuel prices offset the rising cost of food, clothing and household goods.

The CPI slipped back to 2.6 per cent in June after rising to a near four-year high at 2.9 per cent in May.

“Even non-food categories experienced an uptick – a welcome relief given the poor performance recently.

“Retailers taught us a thing or two about back-to-school, with children’s clothes and footwear obtaining top-marks in terms of sales.

“Elsewhere, growth in home improvement sales – including furniture – point to the influence of staycations, although it could also be that home furnishing retailers are not having to compete with the likes of the Olympics for attention this year.”