German fashion retailer Zalando has posted a 28.7 per cent rise in revenues for its third quarter despite a “weaker than expected October”.

In the three months from July 1, the ecommerce site achieved revenues of £945 million while gross profits reached £385.69 million.

The growth in sales was reflected in its user base, which rose 15.7 per cent year-on-year to 22.7 million, with average orders per customer also rising 12.1 per cent.

Meanwhile the retailer’s earnings before tax dropped significantly from £11.17 million last year to -£5.19 million this year, reportedly due to a rise in the fulfilment cost ratio and a decreased gross margin, which dropped 0.4 percentage points.

Zalando revenues on the up as beauty plans revealed

“The very strong revenue growth in the third quarter underlines our growth focus and shows that our investments already pay off,” co-chief executive Rubin Ritter said.

“For the fourth quarter as well as the coming years, we continue to focus on growth with the goal to double our business by 2020 and remain willing to further invest to reach this ambition.”

Revenue growth for the full year is expected to be in the upper half of its guided range of 20-25 per cent, although a weaker October has led to expectations of a slight drop in adjusted EBIT margin during its fourth quarter.

For the full year it expects its adjusted EBIT margin to be slightly below five per cent. 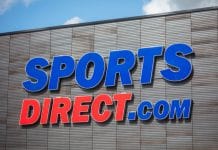