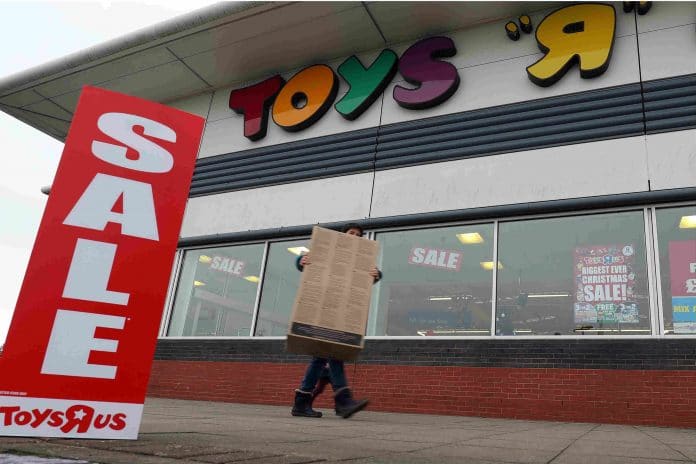 Reports have emerged that advisers to Toys R Us UK are racing to secure a rescue deal for the toy retailer by the middle of next week, just days ahead a mammoth tax bill.

The UK operation of the American brand faces entering administration at the end of this month if it fails to find new investors prepared to foot the £15 million VAT bill.

According to sources speaking to Sky News, Toys R Us UK advisers are set to work through this weekend in an effort to progress talks with potential bidders.

Alteri Investors, an acquirer of distressed retailers, and toy retailer The Entertainer are both thought to have held talks with Toys R Us UK in the last fortnight about buying parts of the embattled business.

Hilco Capital, the firm that rescued music retailer HMV from collapse in 2013, is also understood to have put forward proposal that would involve taking on only a fraction of Toys R Us’ 105 stores in the UK.

Sky News cited sources that said Hilco would probably remain interested in a deal only if it is structured as a pre-pack administration.

The news comes as Toys R Us UK revealed earlier this week that it needed £120 million rescue payment from potential investors to avoid liquidation.

Of that total, £50 million would be used to pay off debt owed to banks by the end of the month while the remaining £70 million would be required in the first year in order to fund its turnaround plan, including a renovation of its store estate and a pricing review.

Just before Christmas, Toys R Us UK secured a company voluntary agreement (CVA) – weeks after its US counterpart filed for bankruptcy.

The CVA included plans to shut 26 of its loss-making stores and cut around 800 jobs during spring.

The CVA was approved after a green light by the Pension Protection Fund due to the retailer agreeing to commit £10 million a year to its significant pensions deficit.

However, after a dreary Christmas trading period, the 2400 staff members who would’ve escaped the job cuts and store closures as part of the CVA were plunged into fresh uncertainty.