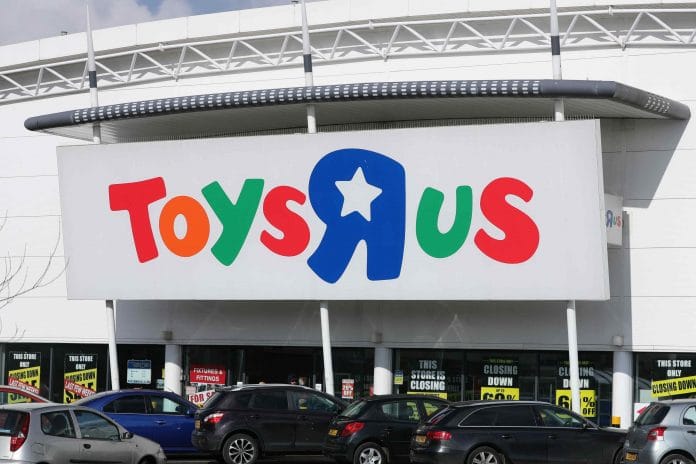 All of the UK stores that belong to Toys R Us are now poised to shut down after administrators failed to find a buyer for the collapsed retailer, resulting in a store closure programme that affects 3000 jobs.

The UK arm of the embattled US-based toy chain appointed Moorfields Advisory partners  Simon Thomas and Arron Kendall to oversee an administration at the end of February.

Today, they confirmed that no buyer was found and that a total of 67 redundancies were made at Toys R Us’ UK head office in Maidenhead.

All staff affected have been informed and will be paid up to and including their last day of employment.

A closure process has also already begun with 26 loss-making stores earmarked from late last year, when Toys R Us UK pushed through a restructure in its company voluntary agreement (CVA) proposal that was approved just before Christmas.

Moorfields said that the remaining 75 stores will remain open and operate as per usual “until further notice”.

However, it added that a closure programme for the remaining stores would take “approximately six weeks” to complete, with “further announcements to follow”.

While it did not specify how many jobs have been lost from the first 26 stores to go and how many will be lost once the remaining 75 stores eventually close down – previous reports estimate that 3000 jobs will be affected in total.

“We have made every effort to secure a buyer for all or part of the company’s business,” Thomas said.

“This process attracted some interest, but ultimately no party has been able to move forward with a formal bid prior to the expiration of the stated deadline.

“It is therefore with great regret that we have made the difficult decision to make a number of positions redundant at the company’s head office in Maidenhead and proceed with a controlled store closure programme.

“We are grateful for the hard work of Toys R Us staff during this very difficult period and will be providing support where we can to those who have been made redundant.”

Toys R Us has extended its nationwide discounting programme to encourage customers to take advantage of special offers available in store as part of the wind-up process.

Meanwhile, the retailer’s pension deficit is also understood to be in the tens of millions.

The Pension Protection Fund, which will have to foot the bill for the deficit as the retailer’s largest unsecured creditor, estimated the deficit was around £30 million, or as much as £93 million on the basis of a buy-out insurer.

The UK retail industry has had a painful start to 2018, with Maplin filing for administration on the same day as Toys R Us and New Look announcing a CVA proposal that could put 980 staff out of work with the closure of 60 stores.

Meanwhile, Mothercare admitted it was in talks with its banks, shares in Carpetright hit an all-time low after it issued its third profit warning in just four months, House of Fraser and Debenhams have also been underperforming, and the Big 4 grocers announced fresh rounds of job cuts in January.