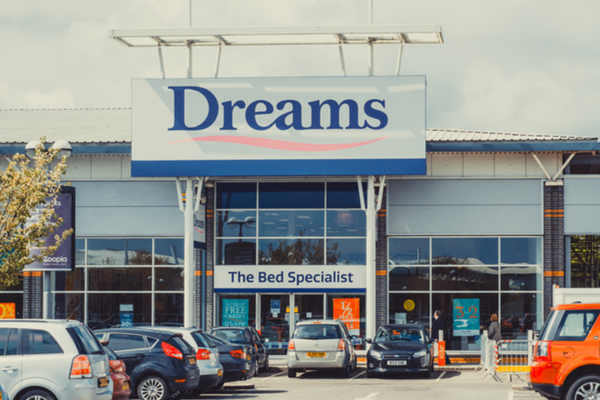 Dreams has posted a growth in profits and sales for the fourth year in a row, defying the woes facing many of its competitors on the high street.

The bedding retailer’s pre-tax profits grew 7.2 per cent to £29.2 million in its full-year period ending December 24, while like-for-like sales went up by 3.3 per cent against strong comparatives.

Meanwhile, total sales enjoyed a 7.2 per cent uptick to £300 million and underlying pre-exceptional EBITDA went up 7.6 per cent to £43 million.

Dreams also recorded a pre-exceptional EBITDA margin of 14.3 per cent, a small increase on the 14.2 per cent recorded in 2016, and group profit before tax increased 7.2 per cent to £29.2 million.

In addition, Dreams’ online business surged 15 per cent and web sales now reportedly accounts for around one in every five purchases.

Eight new stores opened during the year, including two relocations, while 23 others were refurbished.

Since the start of its 2018 fiscal year Dreams opened another three stores, taking its total to 190.

The results are a far cry from the dire situation the retailer was in in 2013, when it verged on collapse was losing £5 million a year.

It bought out of administration by current owners Sun European Partners and chief executive Mike Logue was hired to turnaround the business in 2013.

“Our results for 2017 reflect our ongoing investment and commitment to make, sell and deliver the most comfortable beds across the UK,” Logue said.

He added: “While the UK consumer economy continues to face a number of challenges, our continued growth and improvement puts us in a strong position to gain further market share.”

Sun European Partners was close to reaching £400 million sale of the business last year, but a potential deal was shelved over reports of an ownership dispute.