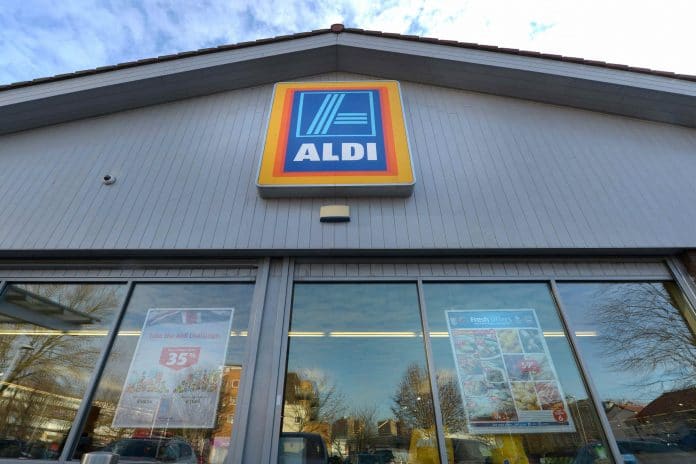 Aldi was the only grocer to have recorded double-digit sales growth last month, bringing it even closer to overtaking Morrisons in market share, according to the latest data.

New figures from Kantar show that the German discount grocer recorded a 10.6 per cent year-on-year surge in sales, helping it achieve a new record high market share of eight per cent – a significant jump from the 7.3 per cent market share recording this time last year.

This means Aldi is now only 2.3 percentage points away from achieving Big 4 status and overtaking Morrison, which has a market share of 10.3 per cent.

Kantar head of retail insight Fraser McKevitt said: “13 million households visited Aldi at least once in the past 12 weeks – now more than those shopping at Morrisons.”

Meanwhile, Asda built on two years of continuous growth and increased sales by 0.1 per cent year-on-year, allowing it to overtake Sainsbury’s to become the UK’s second largest retailer with a 15.4 per cent market share.

The news comes as overall UK grocery sales grew 1.4 per cent year-on-year during the 12 weeks to March 24.

This year’s late Easter, and the fact that Mother’s Day falls outside the reported period, contributed to the market growing at its slowest rate since March 2018 and trimmed an estimated 0.5 percentage points off the overall growth rate.

“Despite Easter being a full month away British shoppers have already splashed out £146 million on Easter eggs this year and 42 per cent of households have bought hot cross buns,” McKevitt said.

“Some have used the longer lead up to Easter to embark on a spring clean, with sales of carpet cleaners up by 18 per cent and accessories such as cloths and sponges up by nine per cent compared with this time last year.”

Lidl was the second-fastest growing grocer, with Kantar indicating it grew 5.8 per cent year-on-year – but this was still now where near Aldi’s double-digit growth.

Online-only retailer Ocado recorded the third-largest sales growth, with an uptick of 5.5 per cent year-on-year that boosted its market share to a new high of 1.3 per cent.

“Despite being overtaken by Asda in main store sales, Sainsbury’s remains the biggest seller of food and drink out of the two retailers and these figures do not include Argos,” McEvitt said.

Morrisons was the only other grocer to have experienced a dip in grocery sales, with a marginal 0.1 per cent year-on-year decline despite attracting an additional 40,000 shoppers over the past year.

Growth accelerated by 3.9 per cent at the Co-op, taking its market share to 6.1 per cent.

At 1.3 per cent, Waitrose posted its strongest sales growth since August 2018, but its market share held steady at five per cent.

Finally, Iceland sales increased by 0.6 per cent year-on-year, with its share staying at 2.1 per cent of the market.

Separate data from Nielsen, also released today, showed that consumer spending in the grocery sector continued to slow for the third consecutive month, with sales up 1.2 per cent in the last four weeks.

This was below the CPI rate of 1.9 per cent and compares to 2.5 per cent growth recorded this time last month.

Nielsen said the continued slowdown in grocery spend could be attributed to increased costs of living from rises in energy and fuel prices, the upcoming increase in council tax, and extended uncertainty over Brexit negotiations.

Nielsen’s data also indicated that consumers were spending less at the Big 4 supermarket chains, leading to a rise in sales at Aldi and Lidl – whose combined market share in the last 12 weeks amounted to a record high of 16 per cent.

“The first quarter of 2019 has shown a continued slowdown in consumer spending on grocery, with the average household spend each week on groceries amounting to £71, back to the level last seen in October 2017 – excluding March 2018, where sales were stronger due to the ‘Beast from the East’ which caused people to stock up, and an early Easter,” Nielsen head of retailer insight Mike Watkins said.

“This means that grocery spend remains broadly unchanged in the last 18 months despite inflation. We can see a change in shopping behaviour as well as a shift in sentiment as households shop around to make savings.”

He added: “We can see that the last few weeks have continued to be challenging for retailers.

“WHowever, there should be brighter times ahead, with Easter on the horizon bringing attractive seasonal promotions to encourage shoppers to spend more on confectionery, snacks and drinks.

“If this is accompanied by warm spring weather and more clarity over the status of Brexit, this will help to kick-start growth for the big supermarkets and boost sales in time for summer.”