// She has been in the role for almost two years

McDonald, who led the bellwether retailer’s non-food division, will be leaving the business after nearly two years in the role.

M&S did not make it clear as to why McDonald was leaving, although recent news reports indicated that McDonald was on the verge of resigning after the retailer’s non-food arm posted another set of declining sales.

M&S said chief executive Steve Rowe will be taking over the leadership of clothing & home directly in the near term.

“Jill was brought in to establish a strong platform for the transformation of the Clothing and Home business,” Rowe said in a statement.

“She has achieved that; she leaves with my thanks and good wishes for the future.

“She has recruited a talented team, improved the quality and style of product and set a clear direction for the business to attract a younger family age customer.

“The business now needs to move on at pace to address long-standing issues in our clothing and home supply chain around availability and flow of product.

“Given the importance of this task to M&S I will be overseeing this programme directly.”

When McDonald was first appointed to the role in October 2017, M&S said she would be responsible for the overall profit and loss accountability in all aspects of its non-food arm, a division of the business which has been struggling in recent years compared to its food arm.

Prior to M&S, McDonald was chief executive of Halfords.

In the year to March 30, M&S’s overall profit before tax declined for the third straight year, dropping 9.9 per cent year-on-year to £523.2 million – while group revenues also dropped three per cent to £10.37 billion.

This included a 1.8 per cent decline in UK sales, with clothing & home like-for-like sales down by 1.6 per cent.

While the food division also endured a 2.3 per cent drop in like-for-like sales, its total sales fared better.

Total clothing & home sales fell by 3.6 per cent year-on-year, compared to a 0.6 per cent slip in total food sales.

M&S is currently in the midst of a major transformation scheme, which includes scores of store closures – especially clothing & home stores – and a deceleration of its Simply Food expansion. 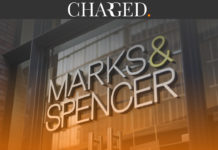