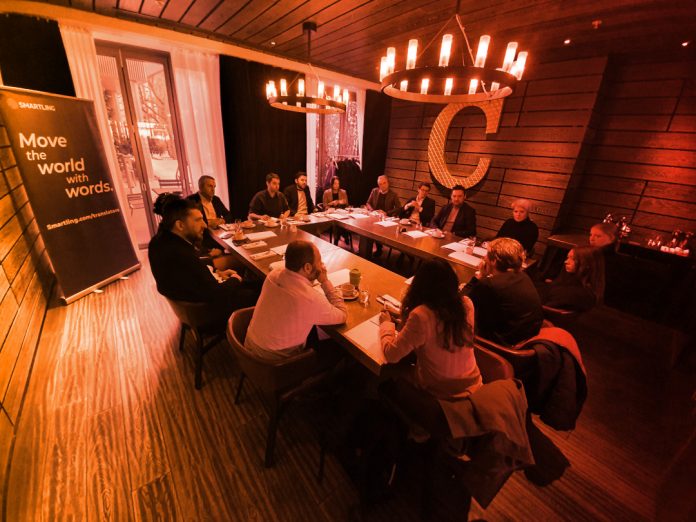 The John Lewis Partnership (JLP) started including national flags on its John Lewis and Waitrose staff’s name badges earlier this month, to indicate to in-store customers the array of languages its employees can speak.

Initially suggested by a member of its stores team, the initiative was introduced as a way of illustrating the business’s multilingual workforce, giving shoppers a signpost about what languages they can use to interact with staff.

During the same week, Amazon launched its first Hebrew-language website to cater for its customers in Israel, and H&M rolled out a dedicated site for its Egyptian audience, complete with Arabic language product listings and static web content.

Translation – and more widely, the language companies use – matters in retail. And it was against this backdrop of linguistic landmarks that Retail Gazette and Smartling hosted a breakfast roundtable on November 12, at Sea Containers restaurant in London.

Smartling is a language translation company that helps retailers and brands localise their content across devices and platforms so they can reach their customers in their language. Its technology automates the process surrounding translation by integrating with clients’ content, and making it available to human translators.

More details about Smartling can be found in a recent Retail Gazette Q&A with founder, Jack Welde, and representatives from the business joined an array of retailers for an open and wide-ranging debate on internationalisation, localisation, and translation.

Companies represented in the room were Dixons Carphone, Dune, LK Bennett, Ocado, RS Components, Sainsbury’s, Ted Baker, The Body Shop, and Waitrose – all of which have their own strategies and requirements related to localisation and translation.

Those in the room all had different approaches to international expansion from a digital perspective. Not all organisations translate their websites and online marketing into the local language in which they operate, but some always do, and others translate certain languages but not all.

For some, the decision is strategic. For others, it comes down to available resources within the organisation.

Graham Broomfield, ecommerce, digital and omnichannel director at LK Bennett, told the roundtable the fashion retailer has recently launched online into 30 new countries thanks to a partnership with eShopWorld.

“We are a British brand and we see that as selling point when entering new territories, so our approach at first will likely to be to use English language generally with local currencies and local payment facilities and add local language around the online checkout,” he explained.

“At present, we are driving sales with an English language website in each of the new countries using local currencies, but once we’re more embedded in our new regions we’ll be exploring the benefits of localising the language we use on the websites.”

Others around the table explained how they struggled to optimise the translation process in their respective businesses, and that was impacting their ability to scale internationally at a rapid rate. One of the roundtablers said their organisation was “fighting a battle” internally to keep pace with all the work required to translate communication across multiple digital channels.

The importance of speaking the right language when expanding abroad was underlined with several stories heard at the roundtable about product names being lost in translation.

If a brand targeted at young people in the UK describes products positively as “sick”, there are very few countries where the same term carries the same positive meaning. Indeed, it is colloquialisms and tone of language where so much attention needs to be paid to translation.

Several retailers around the time suggested it was important to maintain a combination of automated translation for speed of turnaround and human-checking to ensure the right context carries across borders.

Sometimes when things get lost in translation it can cause offence. Inditex-owned Zara was forced into an apology in 2015, for example, when a Spanish-to-German translation of a footwear product line resulted in “sklaven sandalen” being listed on its German website. The local translation, “slave sandals”, clearly has deeply offensive connotations, and the retailer moved quickly to amend the item.

Dedicating time to ensuring retailers don’t fall foul to similar situations is difficult, the delegates acknowledged, with UK-based digital teams often given the responsibility of looking after international affairs as their companies grow.

On the subject of resource, which several retailers around the table said presents a major challenge for their organisations when trying to map out the right international digital strategy, Broomfield remarked: “In retail more widely, there is still a need to educate the business about the role digital can play.

“There are several cases I know of, speaking with e-commerce directors within the industry, where the UK digital team is expected to absorb the extra work that comes when a retailer expands abroad launching localised websites.”

He added: “Often, extra resource only comes once the growth has been achieved, but how much more growth could be achieved if the resource for things like localisation, translation, and international digital strategy was introduced in the first place?”

Intriguingly, some of the event attendees said they are exploring ways to offer translated services within the UK, to cater for what is an increasingly multicultural society.

Delegates around the table talked in detail about the connection with certain geographies and communities that might be strengthened by tailoring language of their digital communications accordingly. It goes to show that translation and localisation is not just a cross-border consideration.

Stuart Eames, retail innovation lead at grocer Waitrose, and a roundtable participant, noted: “A common request from our customers in Wales is for in-store technology such as self-service machines to present a Welsh language option.

“Obviously it’s important to listen to shopper feedback, and it does make us consider our strategy. We don’t have a large consumer business outside of the UK, so international translations are not top of our priorities, but feedback from our Welsh shoppers does make us think how we could tailor our communications – both in shops and online – for an increasingly multicultural audience in the UK.”

Referencing the aforementioned move in JLP stores, he added: “We already put flags on staff badges to indicate what languages they speak, so any additional moves would build on this inclusion drive.”

Smartling sales director, Adam Bye, who was involved in the roundtable discussions, said: “Translation is just one – albeit an important – part of localisation strategy for retailers expanding into new regions.

“Retailers need to take into account the culture of a region and the nuances of language in relation to that culture. As the discussion showed, there have been several incidents where retailers have made translation mistakes that if not addressed quickly can impact on the experience customers have of that brand as it arrives in new regions.”

He added: “It is encouraging to see retailers giving so much thought to localisation and translation. In today’s competitive environment, retailers need to remove any potential barriers to completing a transaction, and speaking the right language is a great place to start.”