Flat sales aren’t normally a reason to jump up and down, but Dixons Carphone said it saw “encouraging results” during the Black Friday and Christmas trading period – when overall group sales at the retailer remained flat.

The parent company of Carphone Warehouse and Currys PS also hasn’t had the best start to the year after admitting to an embarrassing error, which saw it reporting a two per cent rise in group sales – when in fact sales had dropped by two per cent during the 10 weeks to January 4.

Dixons Carphone also reported a slump in mobile sales, which fell by nine per cent in like-for-like terms in the UK and Ireland.

According to insight from Deloitte, the market for mobile phones is changing and has reached “its natural plateau”. Adoption seems to have peaked, with only one per cent recent growth.

Mobile sales have been hit as customers hang on to their handsets for longer, sometimes even waiting three to four years before purchasing a new phone.

The harsh reality for Dixons Carphone might be that ditching the Carphone Warehouse fascia might benefit the business, despite suddenly scaling down to half its size. But an electricals chain that doesn’t sell mobile phones might be unusual in the retail world, and chief executive Alex Baldock is focusing on trying to reshape the current model.

He has so far persuaded the network operators to relax the terms that require it to sell a specific number of phone contracts each year.

Baldock said the company has invested tens of millions of pounds in its 300 larger stores, mainly in retail parks, and said its 70 new “gaming battlegrounds”, where customers can play video games were popular.

However, to add to the group’s woes, Carphone Warehouse is expected to rack up £90 million worth of losses this year, and won’t break even until 2022 at the earliest – eight years after the £3.8 billion merger with Dixons in 2014.

Group profits of £210 million will come entirely from electricals and its international operations.

A Dixons Carphone spokesperson told Retail Gazette that “the UK mobile market has been challenging”. Despite this, the company said it was “focused on building a business for the long term”.

Dixons Carphone has fought back by renegotiating its network contracts, expanding its sim-only deals and credit-based bundles, speeding up its website and launching a mobile app at Currys PC World.

It also revealed last month that it will outsource its call centres as part of a new initiative to help increase its customer satisfaction score as well as improve cost efficiency.

Jack Stratten, a consultant at retail consultancy firm Insider Trends, argued that Dixons Carphone needed to change its business model and brand in the long term.

He said the appeal for mobile phones has inevitably declined over the years because more companies are selling mobile phones, and “mobile networks are making it increasingly desirable to purchase phones through them on lengthy contracts”.

Aaron Shields, an executive strategy director at brand agency Fitch, agreed. He said the mobile phone category itself has evolved.

“Mobile phones have become highly commoditised and this has of course affected purchasing behaviours,” he said.

“People now view buying a phone as a convenience purchase and are not willing to pay over the odds for it.”

Shields added that regardless of Dixons Carphone’s efforts to offer a wide product range and renegotiate its network contracts, “its competitive advantages are no longer a must for customers”.

Meanwhile, Ed Whitehead, managing director of fraud protection service Signifyd, said many retailers face a decline due to the growth of online-only retailers in the last decade.

“The rapid shift, including the rise of direct-to-consumer retailers, has changed the way consumers shop and significantly heightened their expectations,” he explained.

“From a consumer perspective, it’s liberating to be able to get anything you want delivered next-day – or even same-day – but this convenience kills consumers’ motivation to visit stores.”

A spokesperson from marketing agency Hawke Media agreed, adding that Dixons Carphone is facing a decline due to the rise in competition, but added that “at the end of the day, people pay for value”.

“There will be people who go to Amazon to find a cheaper alternative, but what Dixons should focus on is product and experience to differentiate their core product,” they said.

Shields said Dixons Carphone’s next innovation needs to muscle into customer relationship – becoming more useful for breakages, billing options or advice on getting more out of the customer’s phone.

“Equally important will be a solid investment into the store experience – how can the brand draw people to visit the store again, how can it develop a community, how can it host a retail experience which enhances, educates, delights?”

However, Hawke Media said Dixons Carphone needed to minimise its products, which could help it create a brand image.

“Instead of diversifying in order to thrive, they need to minimise products and make sure they have three champion product lines that differentiate from all of their competitors,” the spokesperson said.

“Take Apple for example. They have three core products that differentiate themselves from other electronics brands: the iPhone, the MacBook, and the iPad. Dixons could benefit from taking the same sort of direction as Apple.”

The fact that the Carphone slice of the business has survived for so long is questionable, as the brand is essentially a middleman in a margin-declining sector, and so faces real uphill challenges.

Arguably, Carphone Warehouse’s offers are no longer enough to keep up with increased competition and consumers’ overall declined interest in the mobile phone category.

Dixons Carphone has been in turnaround mode for a while, and the two per cent like-for-like rise in electrical sales suggests that progress is being made in almost all parts of the business.

However, its mobile arm continues to be a drag, which is partially down to consumer shopping trends. Brits are happy to load up on giant TVs and buy the latest gadgets but the excitement about having the latest handset has faded.

Being one of the UK’s biggest consumer electrical and mobile retailers, with nearly 1500 sites and over £10 billion annual revenue, Dixons Carphone is arguably uniquely positioned to mitigate declines by leveraging its ecommerce platform, pick-up in stores, credit terms and product mix to maintain a strong market share. 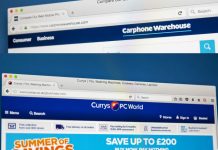