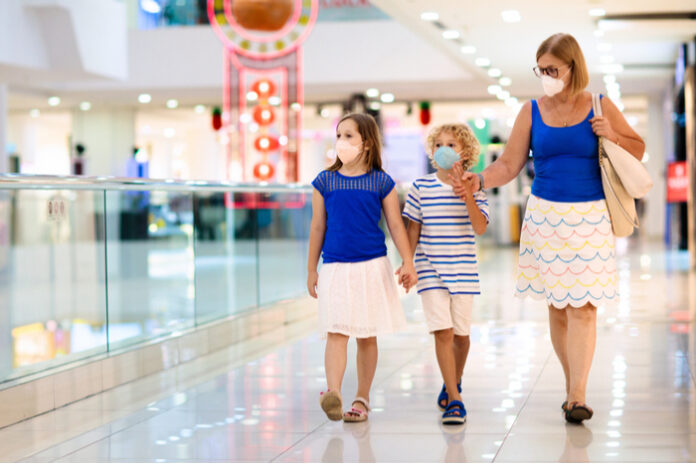 // Face coverings must be worn inside most enclosed public spaces, such as supermarkets, takeaway shops, banks & shopping centres

// Eat-in and many leisure sites, such as restaurants, cinemas and gyms, are exempt

People will need to wear a face covering inside shopping centres, banks, takeaway outlets, sandwich shops and supermarkets under updated regulations that take effect in England from tomorrow.

Face coverings will also be mandatory in railway stations and airports, while venues such as restaurants, pubs and gyms will be exempt.

The Department of Health and Social Care confirmed it would be compulsory to wear a face covering when buying food and drink to take away from cafes and shops, meaning that people will be required to wear one in the likes of Pret A Manger.

As well as shops and supermarkets, face coverings must be worn inside banks, building societies and post offices under the regulations which are enforceable by the police.

Wearing a face covering will not be made mandatory in other venues including eat-in restaurants and pubs, hairdressers and other treatment salons, gyms and leisure centres, cinemas, concert halls and theatres.

“As we move into the next stage of easing restrictions for the public, it is vital we continue to shop safely so that we can make the most of our fantastic retail industry this summer,” Health Secretary Matt Hancock said.

“Everyone must play their part in fighting this virus by following this new guidance.

“I also want to thank the British public for all the sacrifices they are making to help keep this country safe.”

The same exemptions as for public transport will apply, with children under 11 and people with breathing problems not required to wear a covering.

Anyone who cannot put on, wear or remove a face covering because of a physical or mental illness or impairment or disability is also exempt.

The public are advised to wash their hands before putting a covering or mask on or taking it off, and to avoid touching their eyes, nose, or mouth while wearing one.

Face coverings should be stored in a plastic bag until they can be washed or disposed of, the Department of Health said.

The government said the responsibility for wearing a face covering “sits with individuals”.

“Businesses are encouraged to take reasonable steps to encourage customers to follow the law, including through signs and providing other information in store,” it said.

A spokeswoman for Sainsbury’s said the supermarket is asking everyone to continue “playing their part in helping us to keep everyone safe in our stores and to wear face coverings”.

“Posters will be displayed inside and outside our stores and there will be regular tannoy announcements asking customers to follow the new rules, but our colleagues will not be responsible for enforcing them,” she said.

Packs of face coverings will be available for purchase near the front of Tesco stores for anyone who has forgotten to bring one.

It is understood that customers will be able to open them and add to their basket to purchase later.

A spokesman for Asda said the supermarket is confident that customers will wear face coverings.

“Whilst we will do all we can to strongly encourage customers to wear a face covering inside our stores, it is the responsibility of the relevant authorities to police and enforce the new rules,” he said.

A Waitrose spokeswoman said staff at the entrance to their supermarkets will be reminding customers of the new requirement, adding that any customers who are exempt just need to say so.

The Prime Minister’s official spokesman told reporters on Thursday: “You’ve seen over the course of recent months the British public have voluntarily chosen to follow the guidance because they want to help slow the spread of the virus and I’m sure that will be the case with face coverings as well.

“With shops, we would expect them to give advice to customers and remind them that they should be wearing a face covering and I’m sure the overwhelming majority of the public will do so.”

Those not wearing their masks properly over both mouth and nose will be “advised as to the right and safest way to wear a face mask” rather than be immediately fined up to £100 for non-compliance, said the Number 10 spokesman.