M&S has appointed two new board members as it announced further changes to its business at its AGM on Friday.

The chairman of advertising agency Wunderman Thompson, Tamara Ingram has joined the board as non executive director.

M&S said during its AGM that due to food sales proving a challenge in the past 14 weeks thanks to Covid-19, there will be no dividend this year for shareholders.

It remains unlikely that there will be a dividend next year, as M&S chairman Archie Norman said that colleagues did not receive a pay increase and there have been no bonuses for management.

Norman added that food sales have been challenging because M&S is “not like most of the other grocers”.

“When people were stocking up at the beginning of the crisis, they were less likely to shop with M&S,” he said.

“It’s been a tough time for the business. There’s been huge frustration because we felt that with our transformation programme, we were starting to show some real progress before the Covid crisis struck.

“Our food business was outperforming most other food retailers. In clothing and home, womenswear was for the first time in years, holding market share.”

As a result of the pandemic, M&S said it tried to take advantage of the opportunity the crisis has given retailers.

Subsequently, the retailer has launched its ‘Never The Same Again’ programme because “we want to come back from the crisis a changed business, a faster business”.

Norman said the aim of the initiative is to work three years into one.

“People have been working so differently, working from home, working in a more efficient way, making faster decisions, and supporting our stores,” he said.

“The board has been working hard to secure the liquidity of the business, to make sure that we have the debt facilities to see us through.

“We’ve furloughed 30,000 colleagues and taken advantage of the government debt facilities. The board has been meeting every single week to discuss progress.”

Meanwhile, M&S chief executive Steve Rowe said the group expects the “aftershocks of the crisis to endure for the next year and beyond”.

“While some customer habits will return to normal, others have been changed forever,” he said.

“The trends in digital have been accelerated, and over 365,000 existing customers shopped online with us for the first time in lockdown.

“We’ll be unlocking value through our food supply chain, because we want to improve availability, and reduce waste.

“We also want to create a store estate for the new world. we’re taking the opportunity with our landlords to upgrade our space to make sure it reflects how customers want to shop today. M&S is changing for good.”

For the full-year period ending March 28, M&S’s profit before tax slumped by 21.2 per cent down to £403.1 million, which is below average estimates of around £415 million.

The retailer said overall sales dipped 1.9 per cent year-on-year to £10.1 billion, while like-for-like food revenues in the same full-year period increased by 1.9 per cent.

M&S also told investors prior to its AGM that it took a £52 million hit to profits due to coronavirus, while it estimated that costs and stock writedowns related to the outbreak cost it £212.8 million. 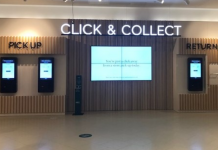