// John Lewis Partnership chair Sharon White said the phrase is under review, raising questions that it could be scrapped

// The department store has used the promise for 95 years

John Lewis could potentially ditch its famous “Never Knowingly Undersold” promise after 95 years, according to reports.

The promise, which doubles up as the department store’s slogan, sees John Lewis offer to refund the difference in price if customers purchased one of its products but found it being sold at elsewhere – excluding online-only retailers – with a cheaper price tag within 28 days

Speaking to The Sunday Times, Dame Sharon White – the chair of parent company John Lewis Partnership – said the slogan was due to be “improved” with an emphasis on the “fairness” of its prices and products.

“The proposition is important because it signifies being fair to society. We’re reviewing it to improve it,” White said.

Meanwhile, John Lewis spokesperson told both Sky News and The Telegraph that that the partnership has been reviewing the slogan since March.

“As flagged in March, we are reviewing our ‘Never Knowingly Undersold’ price promise to ensure we offer fair value for how our customers shop today,” the spokesperson said.

The “Never Knowingly Undersold” catch phrase has been used by John Lewis since 1925.

The news comes as the John Lewis Partnership anticipates that between 60 per cent and 70 per cent of its sales will derive from online this year, a significant jump from the 40 per cent recorded in 2019.

The partnership cited the coronavirus lockdown as the main reason behind the increase.

The slogan review follows a letter White sent to 80,000 John Lewis and Watrose staff in late July, in which she outlined the next steps in the business strategic review that aim to help the partnership flourish after the coronavirus pandemic brought about new challenges.

These next steps included a “rebalance” of the partnership’s store estate, a reduction of head office costs, a focus on home and nursery, a “digital-first” approach in department stores, providing John Lewis Home products within Waitrose stores, and working with third parties on private and affordable rental housing.

This month, the partnership permanently shut down eight John Lewis stores that have not yet reopened since lockdown restrictions were eased in mid-June.

The move placed 1300 jobs at risk of redundancy, and leaves John Lewis with 42 stores, as opposed to 50 before the lockdown. 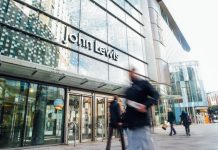