Marks & Spencer has responded to Aldi’s plan to relaunch its Cuthbert the Caterpillar cake to benefit charity.

M&S, which has filed a lawsuit against Aldi for allegedly infringing its Colin the Caterpillar trademark, maintained its stance on the matter and said Aldi should use its own character for the relaunch.

It lodged an intellectual property claim with the High Court last week and wants Aldi to remove the product from sale and agree not to sell anything similar in the future.

Aldi said its limited edition Cuthbert cake was returning for charity, of which profits would go to its charity partners Teenage Cancer Trust and Macmillan Cancer Support.

The German discounter had stopped selling the cake in February, two months before M&S accused it of copying the Colin the Caterpillar’s trademark design.

On Tuesday, Aldi took to Twitter to call on M&S to “take a stand against caterpillar cruelty”.

Hey @marksandspencer can Colin and Cuthbert be besties? We’re bringing back a limited edition Cuthbert and want to donate profits to cancer charities including your partners @macmillancancer & ours @teenagecancer. Let’s raise money for charity, not lawyers #caterpillarsforcancer.

It posted the following to its social media channels:

“Hey Marks and Spencer. Can Colin and Cuthbert be besties? We’re bringing back a limited edition Cuthbert next month and want to donate all profits to cancer charities including your partners Macmillan Cancer Support and ours Teenage Cancer Trust.

M&S said it loved a charity idea, but Aldi should use its own character.

Hey @AldiUK we love a charity idea (Colin's been a BIG fundraiser for years). We just want you to use your own character. How about #kevinthecarrotcake ? That idea's on us… and we promise we won't do Keith 😉

The retailer tweeted back: “Hey @AldiUK we love a charity idea (Colin’s been a BIG fundraiser for years). We just want you to use your own character.

“How about #kevinthecarrotcake ? That idea’s on us… and we promise we won’t do Keith.”

However, M&S’s tweets were met with criticism after Twitter users urged the national chain to reconsider the suggestion.

Many tweeted at M&S to accept Aldi’s proposition with “the little dignity it has left”.

Why just Aldi? All the supermarkets are doing caterpillar cakes …

M&S it's time to let it lie and bow out with what little dignity and humour you have left. pic.twitter.com/BFkDiKGbs7

While others have accused Aldi of using the charity idea as a “scapegoat” to get out of a lawsuit.

Aldi is currently calling on other supermarkets to join it and M&S in raising money or cancer charities through the sale of caterpillar cakes. 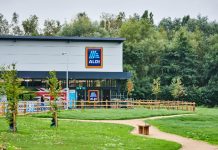