Convenience retail has boomed during Covid-19.

The sector’s popularity shows no sign of abating after all restrictions end, and to capitalise on this, Poundland has become the latest retailer to launch its own local store format in an effort to strengthen its brand awareness.

Poundland Local stores aim to be smaller than a typical Poundland and the compact design would allow it to open in small towns plus residential and urban neighbourhoods not currently served by the discount retailer.

The share of non-affiliated independent convenience stores in the UK accounted for 40 per cent of market share last year, while co-operatives represented only seven per cent, according to a 2020 report by Statista.

There are many national operators in the UK, such as the Co-op, McColl’s, Waitrose, M&S Food, Tesco, Sainsburys and Spar, which each have convenience store formats and stock a wide range of products.

Poundland only recently opened local stores in South Yorkshire and East Yorkshire, both of which employ a total of 24 people and trade from 7am to 9pm.

In recent times, major supermarkets such as Asda and Iceland expressed interest in venturing out into similar, or smaller store formats.

Iceland officially opened the doors to its new convenience format under the Swift fascia in mid-March with a trial store at the former Iceland Four Lane Ends site in Benton, Newcastle upon Tyne. The frozen food retailer said Swift was an entirely new concept designed to provide an easy-to-shop grocery store with the watchwords “Fast. Fresh. Local”.

Established retailers are arguably attempting to capitalise on the growth of convenience retail.

Recent research by Barclaycard Payments found that almost two thirds of Brits have been shopping locally in the last 12 months. This growing trend is set to outlive the pandemic, with 91 per cent saying they would continue shopping locally to support smaller and independent retailers even after all restrictions end.

However, evidence shows that Brits are increasingly choosing to support their independent and local retailers rather than established chains – despite retailers dipping their toes into convenience store formats.

Barclaycard Payments’s research suggested an increased amount of support for local and independent retailers, with 64 per cent of Brits choosing to shop closer to home.

Despite this, a Poundland spokesperson told Retail Gazette that the discount retailer saw “potential for a smaller format to support our growth and transformation programme”.

“Our job is to offer what customers want, where they want it. We’re proud of the fact that we’re growing and creating retail jobs in such a challenging market,” the spokesperson said.

Since rolling out its Diamond/Ice stores following its acquisition of Fultons Frozen Foods last year, Poundland now has over 150 stores with a chilled and frozen offer and in a smaller unit.

The spokesperson said the local store format was “another way for us to bring that offer to our customers”.

Indeed, the retailer has been seeking ways to boost its business, from accelerating its store opening programme to launching new products. A potential float on the stock market is another growth tactic being considered.

Last month, it emerged that Poundland’s parent company Pepco Group snubbed London to instead opt for a stock market listing in Warsaw, Poland – due to a large presence in Eastern Europe. A few weeks later, Pepco Group set its price in the upcoming Polish IPO which valued it at €5 billion (£4.3 billion).

Regarding Poundland’s new local format stores, its spokesperson told Retail Gazette that the retailer was “piloting it to assess customer reaction”.

“We think the combination of a local offer with no convenience premium is an attractive one, but now our real-world trial is under way, we’ll see,” they said.

“Poundland’s threat to the convenience sector cannot be taken lightly”

“The question we asked ourselves is ‘do customers need a Poundland Local?’.

“Clearly, we think there’s an opportunity to develop a neighbourhood community store that doesn’t charge a premium for that convenience. We believe there is, but the pilot will tell us whether we’re right about that.”

Convenience and off-licence retailers – many of whom are independent or small businesses – have further triumphed against their bigger supermarket rivals since the Covid-19 pandemic led to Brits avoiding crowded places or queues outside stores.

Although the pandemic led to temporary closures of non-essential retail due to lockdowns and tiered restrictions, it has provided a silver lining for the convenience market as their  stores remained open due to being classified as “essential”, along with all other supermarkets.

British Independent Retailers Association (Bira) chief executive Andrew Goodacre said he witnessed a “great appreciation of the independent shop and what it provides the local community”.

“Convenience stores and other independent shops have done well by really connecting with their local community – becoming involved through all the social media channels.

“The owners of these shop are often form the local community and it is this special relationship that the independent shop needs to emphasise – as well as ensuring that they can compete of product quality, availability, and service.

“Over the years we have seen large stores develop smaller formats (e.g. Tesco express) and so it is no surprise to see Poundland exploring this market.

“It does seem to be a growing feature of large chains and it provides an opportunity to explore new markets with local shopping having seen an increase in the past 15 months.”

Goodacre explained that Poundland’s local store format poses as a threat to the convenience store market because of the range of products it sells and for being a well-known brand.

“Poundland’s threat to the convenience sector cannot be taken lightly,” he warned.

However, he added that for Poundland to succeed, it will need to select its sites carefully as the small store format does not work everywhere or for everyone.

“It did not work for Morrisons,” Goodacre said.

Indeed, Big 4 grocer Morrisons exited the convenience sector in 2015 in a deal that cost the supermarket group £30 million. It had sold 140 of its M Local stores to a team led by retail entrepreneur Mike Greene, and backed by Greybull Capital.

Morrisons said at the time that it failed to grasp the opportunity of convenience stores when its rivals seized market share and invariably the best locations.

Retail expert Nelson Blackley argued that now was the perfect time for Poundland to dip its toes in the convenience market.

“It’s a smart move by Poundland, a value retailer that throughout the pandemic has continued its transformation programme with investment in new stores, refurbishments, new ranges and distribution,” he said.

“It is definitely worth trialling, particularly post-Covid when the economic impact of the pandemic is likely to mean many more shoppers seeking even more value.”

However, Blackley argued that the real test for Poundland was whether, and at what scale, these Poundland Local stores might stop providing incremental sales and start to “cannibalise sales” of its existing 800 or so full-size Poundland stores.

He also warned that if Poundland decided to roll out its local format nationally, it would impact the existing local convenience stores – whether these are operated by the large supermarket chains or smaller independent businesses.

“Although they might reflect the reduced ‘economies of scale’ and operational cost savings involved in running local stores, there is a growing sense that they are somehow taking advantage of some sections of society.

“By providing the same prices for products whatever the size or location of store, Poundland may take ‘first mover advantage’ and others will have to follow.”

As changing shopper habits and the pandemic continue to transform the UK retail landscape, the function of convenience stores is likely to expand beyond just a quick stop for a beverage or snacks.

Convenience stores have become a viable alternative for consumers by evolving to offer a diverse range of products and services, and it comes as no surprise that established retailers are delving into this market. 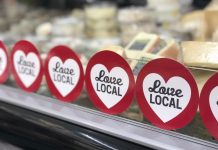