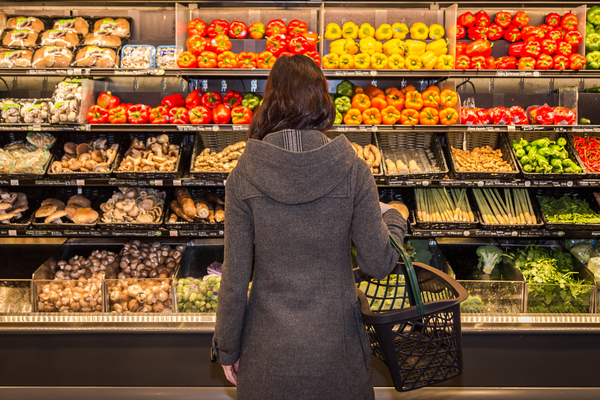 // Online grocery growth has stuttered and ecommerce’s share of the market remained flat at 13.4%

// Aldi was the fastest growing retailer over the past 12 weeks, while Tesco’s market share grew for fifth consecutive month

Grocery sales have fallen from the peak highs seen a year ago when stores were stripped bare in panic buying as the Covid-19 pandemic first descended on the UK, new data shows.

According to Kantar, take-home grocery sales fell 1.6 per cent during the 12 weeks to June 13 compared with 2020, although they remain £3.3 billion higher than the same period two years ago pre-pandemic.

The number of shoppers heading to supermarkets also fell in the four weeks to June 13 by five million trips compared with the previous four weeks as customers took advantage of the reopening of indoor hospitality, spending their cash in restaurants and cafes instead.

Average basket sizes also fell – down 13.6 per cent – although on a 12-week measure, the number of trips to supermarkets increased as shoppers preferred to go more often, rather than big weekly shops.

However, despite pubs and bars reopening, customers still flocked to supermarkets to buy booze for picnics and home barbecues, with sales of drinks up £29 million compared with May.

“While it’s encouraging to see shoppers returning to the habits of old, there is still a way to go before the market entirely returns to normal,” Kantar head of retail insight Fraser McKevitt said.

“That’s demonstrated by the fact that sales in the past 12 weeks were still £3.3 billion higher than in 2019 before the pandemic hit.

“Retailers will also be benefiting from sales of goods consumed on-the-go, such as picnics and lunches eaten at work, which are not captured in these numbers.”

Online grocery sales stuttered during the period, having soared in the past year, and were flat in the four weeks to June 13, taking 13.4 per cent of the total market.

“Tesco launched its Whoosh platform in May to compete against start-up disruptors including Gorillas, Getir and Weezy which are moving into the market for smaller trips, with baskets under £25 currently worth £41 billion online and in-store each year. It’s definitely a case of ‘watch this space’.”

Recent concerns around inflation also failed to filter through to the cost of goods in supermarkets, Kantar’s data suggests, with grocers focusing heavily on promotions.

Kantar found that prices paid fell by 19 per cent year-on-year, due to 29.6 per cent of all grocery spending done via a deal – up from 26.4 per cent a year ago.

Aldi enjoyed the biggest boost in sales among the individual supermarket chains, with a 6.6 per cent rise – having struggled against its rivals during the pandemic due to the lack of an online presence.

It was followed closely by discounter rival Lidl, up 4.9 per cent, and a 3.3 per cent rise at Waitrose.

The hardest-hit was Co-op, which saw sales down 15.8 per cent in the period compared with a year ago, and watched its market share drop from 7.4 per cent to 6.3 per cent.

Iceland followed close behind with an 8.2 per cent fall in sales.

Meanwhile, of the Big 4 supermarkets, only Sainsbury’s saw an increase in sales on a year earlier. Along with Tesco and Asda it also saw its market share rise.