//  Sales plunged 8% at Ocado Retail, its joint venture with M&S

Ocado plunged into loss in its first half as its retail sales fell 8%, which it said both reflected the contraction in the grocery market post-pandemic and cost-of-living crisis.

The retailer made a £14million loss on an EBITDA basis in the half to 29 May, against a £61 million profit last year, driven by the lower sales and cost inflation in its retail division.

This week it emerged that Melanie Smith, the CEO of its retail arm, was leaving the business after three years.

Ocado Retail, its joint venture online grocery operation with M&S, did boost customer acquisition by 12% over the half, despite the sales fall. However, it said average basket size was down 13% to £120 as customers bought fewer items.

On a pre-tax level, Ocado Group made a £211 million loss, which it said reflected the depreciation costs with its ongoing roll out of its Ocado Smart Platform, which helps power the online grocery operations of third-party grocers around the world.

Ocado now has 11 Ocado Smart Platform partners around the world, most recently signing a deal with Auchan in Poland this March. Eight of the 11 are now operational.

The strong growth of this side of the business helped offset the fall in Ocado Retail sales, with group revenue down 4% to £1.3 billion.

Ocado said its full-year performance is in line with guidance and it still had a “clear path” to its goal of achieving £6.3 billion in sales and £750 million in EBITDA in four to six years.

He added: “Notwithstanding the near-term challenges for the consumer in the UK, we look forward to the future with confidence.” 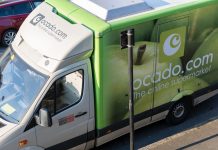