Some £18 million was paid out in 2008 when the building merchant and home & DIY specialist purchased 30 per cent of the business‘ shares, but today‘s announcement and extra £24 million outlay ensures the whole company is now owned by Travis Perkins.

Until today Mark Goddard-Watts and his family trusts still owned the majority of Toolstation, which runs both an internet and catalogue retail operation as well as a quick-growing network of stores.

Since Travis Perkins became a shareholder in the company, which currently has gross assets of £34 million and generated EBITDA of £5 million in the last financial year ending December 31st 2011, Toolstation has grown its property portfolio from 12 to 103 stores.

Geoff Cooper, CEO of Travis Perkins, said: “Toolstation offers great value and better reliability to customers who want to order and get materials in the way that suits them best – online, via their computer or mobile phone, or by a phone call to our call centre, or at our trade counters.

“With next day delivery, reserve and collection through our trade counters and full stocks at our branches, we help keep tradesmen working and productive. If it‘s in our catalogue, we‘ve got it, and can get it to you – fast.”

Cooper added: “Toolstation is a great addition to our consumer division and will add to our growth in market share and returns.

“Following this acquisition of the outstanding equity, we will look to further exploit Toolstation as part of our service to the trade and to DIY customers.” 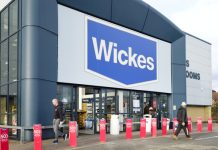 Wickes launches new store on Ebay as it enters the marketplace