Justin King, the CEO of supermarket chain Sainsbury‘s, has criticised the store operations of rival retailer Tesco ahead of the publication of a strategy review by the market leader.

In an interview with The Sunday Telegraph at the weekend, King argued that the recent troubles of the UK‘s largest grocer have stemmed from a failure to deliver a strong customer proposition in store.

Tesco announced a profit warning earlier this year after revealing a year-on-year drop in underlying sales over the all-important Christmas trading period.

Speaking to The Sunday Telegraph, King said: “They have not executed well for customers.

“All retailers struggle when they stop doing a great job for customers. It was true of us during the 1990s. We‘ve been able to see for a long while that what we deliver in service in our shops is significantly better than Tesco.”

Responding to recent difficulties, Tesco CEO Philip Clarke has launched a strategy review of its UK operations, which is due to be completed this week and is expected to conclude that the general offer at the retailer‘s stores needs to be warmer towards customers.

Clarke has also said previously that the grocer‘s focus will now move away from one-off discounts towards widespread cheaper prices.

Grocery retailers have increasingly been focusing on convenience format stores and the growth in large out-of-town supermarket has slowed considerably in recent times, however King argues that the format can still work given the right execution.

For its fourth quarter period Sainsbury‘s reported a 4.6 per cent rise in total sales and a 2.6 per cent increase in like-for-like trading, and also claimed to be growing ahead of the market in its online, convenience and non-food divisions.

Tesco has found trading much more difficult since former CEO Terry Leahy left the business early last year, and just last month the grocer‘s UK CEO Richard Brasher announced that he was stepping down from his position as a result of Clarke taking more control over the company‘s domestic operations. 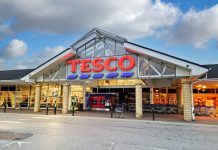