B&Q, owned by the group which also has UK retailer Screwfix as well as international operations within its portfolio, saw total sales dive 8.9 per cent to £968 million, an 11.7 per cent LFL decrease and Ian Cheshire, Kingfisher CEO, explained that the unseasonably wet weather had impacted sales.

“We anticipated the first quarter would be challenging, compared with last year‘s strong growth which was boosted by favourable spring weather and public holidays,” Cheshire commented.

“But an extremely wet April this year in the UK and France compounded the difficulty, adversely impacting sales of outdoor and seasonal categories.”

Seasonal product sales, which can represent as much as 30 per cent of total sales at the retailer over Q1, have plummeted 30 per cent over the period.

Despite cost initiatives implemented to offset the impact of this seasonal sales slump, retail profit at B&Q fell 13.8 per cent to £65 million.

Screwfix however, posted positive results following the introduction of new ranges and the continued roll out of new outlets.

Total sales rose 10.2 per cent to £137 million while retail profit jumped 31.7 per cent to £11 million thanks to strong sales growth and a focus on direct sourcing.

Strong sales at its French-based operations also buffered the figures, as total sales at businesses Castorama and Brico DÃ©pÃ´t grew by 1.3 per cent and 3.3 per cent respectively.

Looking ahead to the rest of the financial year, Cheshire believes that these mixed results offer reasons to be positive.

He commented: “With the first quarter typically one of the least significant of the year and with the key summer season still ahead of us, we remain confident that we are well prepared to capitalise on any improvement in conditions and deliver a solid full year result.” 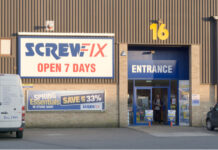 Ikea to end sale of all single-use alkaline batteries globally by...