Home and DIY retail group Kingfisher saw pre-tax profit plummet 15.5 per cent to £371 million in its first half, it has been announced today.

Blaming the vulnerability of the Homewares and DIY markets, the group also highlighted the effect of wet weather, which was also discussed in its second quarter results released in July.

Kingfisher CEO Ian Cheshire, who is to take on the role of Chairman of the British Retail Consortium, succeeding current Chairman Rob Templeman, commented on the results, conceding: “This has been a tough first half with unprecedented wet weather throughout the key spring and summer seasons in Northern Europe.

“This affected footfall and demand for outdoor maintenance, gardening and leisure products, which normally account for a significant proportion of our first half sales.

“Whilst we were unable to offset fully the adverse weather impacts, our efforts meant we exited the first half in as good shape as possible and with net cash on the balance sheet.”

The group, which owns retail brands B&Q, Screwfix, Castorama and Brico DÃ©pÃ´t, has a total of 988 across eight countries in Europe and Asia and as such has been hit by ongoing austerity measures implemented in some debt-stricken European countries.

Over the half, the group has opened 35 new stores, 28 of which were in the UK and primarily Screwfix stores while also increasing its presence in France, Russia, Turkey and Spain.

Retail profit dropped 24.1 per cent to £125 million in H1, though it is hoped that B&Q‘s close relationship with Screwfix will help lift sales as the group noted that the pair “are increasingly operating together.”

Screwfix total sales rose 8.9 per cent to £273 million thanks to a continued rollout of new stores while retail profit rocketed £9.1 per cent over the period to £20 million as the retailer continues to eye expansion with a further 30 stores expected to open during H2.

Cheshire remains positive in his outlook for the coming months, believing that the group‘s ‘improvement strategy ‘Creating The Leader‘ will boost profit for the long-term.

However, he remains cautious as a result of current market conditions, commenting: “Whilst an uncertain economic backdrop has been a feature of our markets for some time, we recognise that this is unlikely to improve for a while.

“In the short term we will continue to focus on trading effectively, whatever the market conditions, whilst accelerating our self-help initiatives where practical and remaining agile in order to capitalise on opportunities as they arise.

“Having got off to a good start with our new ‘Creating the Leader‘ programme, I am very confident that we can create a world class home improvement retailer and unlock the full potential of our international talent and scale.” 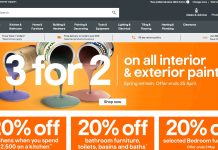 Should retailers look to launch their own marketplaces?